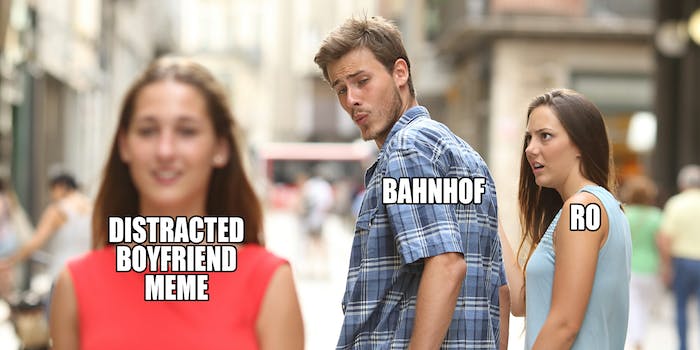 Tfw you don't get a meme.

The Distracted Boyfriend was 2017’s most popular meme, and it was seemingly everywhere online. Now a group that oversees advertising content in Sweden has ruled the meme sexist and says it should not be used by Swedish companies.

On April 4, the meme was used by Bahnhof, a Swedish internet provider who was looking to hire new employees. Their version of the meme, which was posted to Facebook and Instagram, labels the girlfriend as “your current employer” the boyfriend as “you,” and the other woman as Bahnhof.

“Looking for a new job?” reads the ad’s caption, as translated from Swedish, along with a link to the company’s current open positions.

Sweden’s Advertising Ombudsman (RO), has called the ad “gender-discriminatory” and says it violates article four of the International Chamber of Commerce guidelines for marketing, which states: “Marketing communications should respect human dignity and not incite or condone any form of discrimination or anti-social behaviour.”

Below is the ombudsman’s statement, as translated from Swedish.

According to all reviewers, the advertisement objects women and is therefore gender-discriminatory. It produces women as interchangeable items and that only the appearance is interesting. The reviewers point out that the image itself is a well-known image on the internet, a so-called meme, and that it is intended to be humorous, but that does not yet motivate a company to use it in its marketing. There is no link between the objections of women and the Bahnhof or the service.

According to several reviewers, the advertisement also shows stereotypical gender roles of both men and women, which is inferior to both sexes. That men kEven though they are already with a woman, look after other women and that a change of female partner is based on appearance. It gives the impression that men can change female partners in the same way as changing jobs. A notifier further points out that Bahnhof may not be interested in female applicants with this advertisement.

Bahnhof responded to the claims by saying “The situation is exactly the same regardless of the colors, shapes—the advertiser does not read gender roles or gender characteristics of anyone.” They also noted the popularity of the meme: “this meme has circulated on the internet for about a year, and has been used in countless ways to convey as many messages.”

It’s important to note that the ombudsman can only make recommendations, and the group does not have the power to force a company to remove advertising. In fact, as of this right now, the Facebook post is still up and seems to be causing quite a stir. It has received nearly a thousand comments, compared to the usual 5-20 most of the company’s post get. Some of the comments got pretty heated and caused Bahnof to respond. “Hey! We like open discussions online and Facebook, and would love to keep it that way,” the company wrote. “This is exactly what we are fighting for—that you should think different and argue for it. But stick to the point! Personal attacks and death threats do not belong here and lead nowhere (except for any legal sanctions).”

On September 24, Bahnhof created a followup post on Facebook, saying it disagreed with the ombudsman’s assessment and adding that if the company should be punished for anything, it should be for “using a way too old and tired meme.” Wow, burn.