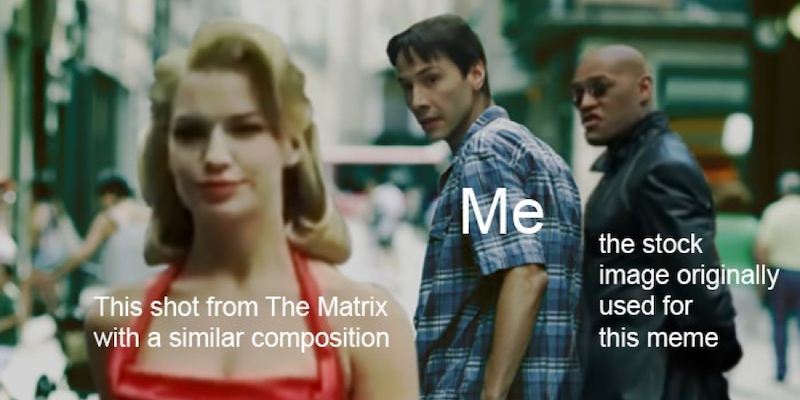 If you take the red pill, you realize Distracted Boyfriend is the Matrix

One of the most enduring memes of 2017, the Distracted Boyfriend was a metaphor for every shiny thing that pulls our attention away from our real priorities. But what if the iconic image of the boyfriend, the girlfriend, and the woman in the red dress actually took place in the illusory world of The Matrix? It’s not as farfetched as it sounds.

YOU GUYS the distracted boyfriend meme takes place in the matrix pic.twitter.com/woggiAQVqp

It’s been nearly 20 years since The Matrix, so let’s take a look back at the scene that’s reminding people of the distracted boyfriend. You may recall that the movie featured its own woman in a red dress. As Morpheus (Laurence Fishburne) tries to teach Neo (Keanu Reeves) that the Matrix is an artificial world that keeps humans pacified, Neo finds himself distracted by the woman.

The parallels to the meme are obvious: In both, the red dress woman exists, and a male character is gawking at her when he should be listening.

The viral tweet that pointed this out did get something wrong, though: The shot in the movie doesn’t actually have a “similar composition” to the meme. In the meme, the woman is walking toward the camera, while the boyfriend is walking away from it, his head turned to check her out as she passes. Both of their faces are visible, and so is the girlfriend character.

In the movie, when we get a shot where Neo and the Woman in the Red Dress are both in the frame, we’re looking at the back of Neo’s head. Morpheus isn’t visible.

But that’s just a nitpick with the execution. The larger joke still works. The woman in the red dress is a training program meant to show how the agents of the Matrix distract and trick humans. If the distracted boyfriend is seeing her, how do we know he’s not living inside an illusion while his real body is hooked up to a giant alien battery?