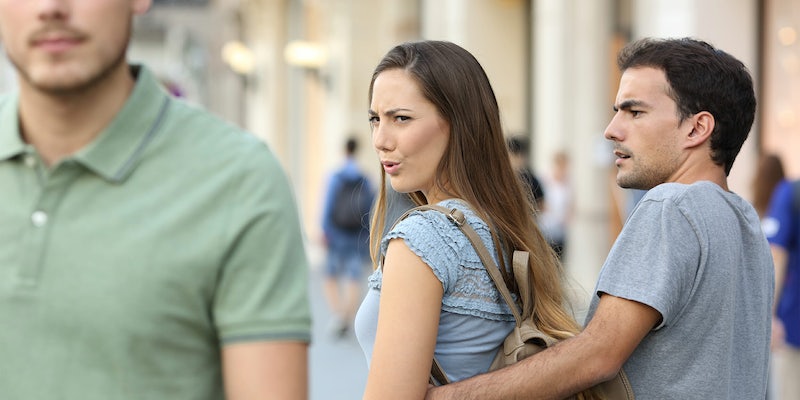 It's the meme that just keeps on giving.

Just when everyone thought the saga of the distracted boyfriend meme was finally over, a new picture from the internet’s favorite stock photo series has surfaced.

The distracted boyfriend meme—a stock photo of a man, presumably with his girlfriend, checking out a different girl—took the internet by storm in August. In the meme, the guy represents “you,” the girl walking by represents a distraction or a mistake or something better, and the girlfriend represents what you should be focusing on.

Different iterations of the meme popped up throughout August and September. Eventually, fans of the meme learned the real reason why the distracted boyfriend left his girlfriend and that photographer Antonio Guillem had actually taken an entire photo series explaining the plot.

Now another photo has surfaced and it creates more questions about the infamous couple than it answers.

In this new photo, the woman who was previously depicted as the upset girlfriend is now the one checking out another dude. But the guy who is supposedly her partner in this new photograph is not the same boyfriend seen in previous images.