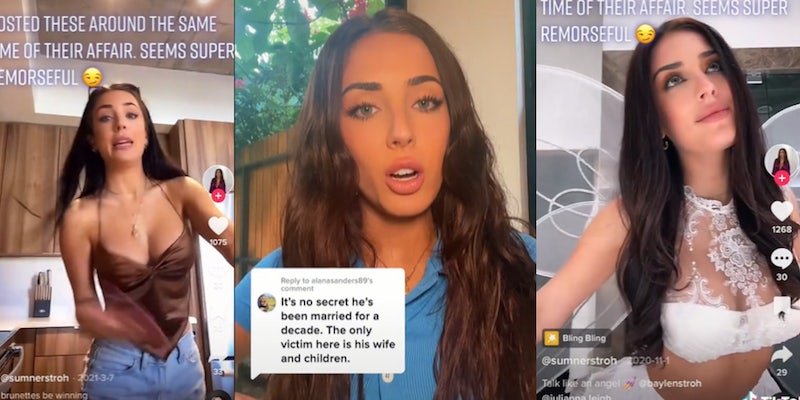 Sumner Stroh accused of trolling Adam Levine’s wife in a resurfaced video while dressed as an angel. His wife is a Victoria’s Secret model

'People have started to go through her old videos.'

Sumner Stroh appeared to have dropped a bombshell on Monday when she revealed that she had an affair with Maroon 5 frontman Adam Levine and shared screenshots of him asking to use her name for the child he has on the way. But in the fallout (and denial from Levine), TikTokers are taking to analyzing older TikToks for clues—while Stroh is defending herself.

In one such video, a TikToker pulls up several videos posted by Stroh around the time that her affair with Levine allegedly took place. The last video, which is from, November 2020, features Stroh posing in an angel costume. (It’s one of several videos, posted just after Halloween 2020, in which Stroh and several other women are wearing costumes.)

“Posted these around the same time of their affair,” the caption on the video read. “Seems super remorseful 😏”

When TikTok commentator Noah Glenn Carter highlighted that video, he tied together the song choice Stroh made—Elvis Presley’s “(You’re The) Devil in Disguise”—her outfit, and the fact that Levine’s wife, Behati Prinsloo, was a Victoria’s Secret Angel.

“People have started to go through her old videos from about the time that she would’ve been having the affair with Adam,” Carter said. “And some of them almost seem like she’s taunting Adam’s wife.”

In a follow-up video responding to a comment about how Levine’s marriage was no secret, Stroh didn’t mention potentially taunting Prinsloo. But she did want to clear the air in the wake of the video’s fallout. (We reached out to Stroh for additional comment.)

“The most important part that I did definitely gloss over is the fact that I was under the impression that their marriage was over,” Stroh explained. “I believe that they were keeping it quiet to avoid the negative press because, as I had said, I was new to L.A. So I had just assumed that with celebrities of that caliber, that was just how it was. And that’s why I feel exploited because he knew I believed everything that he said because of my vulnerable position of being new to LA.”

She iterated that given her being new to the city, she was overly naive, but she also wanted to emphasize that she didn’t see herself as the victim.

“In retrospect, I wish I would have questioned things more, I wish I wasn’t more naive, but being naive is not an excuse for what I did and the role that I played in this. Again, in no way was I trying to gain sympathy, and I fully realize I am not the victim in this. I’m not the one who’s really getting hurt here, it’s Behati and her children, and for that, I am so so so sorry.”

In a statement via Instagram Stories on Tuesday, Levine denied having an affair with Stroh, but he admitted that he “crossed the line during a regrettable period in my life.

A lot is being said about me right now and I want to clear the air. I used poor judgment in speaking with anyone other than my wife in ANY kind of flirtatious manner. I did not have an affair, nevertheless, I crossed the line during a regrettable period in my life. In certain instances it became inappropriate; I have addressed that and taken proactive steps to remedy this with my family.

My wife and my family is all I care about in this world. To be this naive and stupid enough to risk the only thing that truly matters to me was the greatest mistake I could ever make. I will never make it again. I take full responsibility. We will get through it. And we will get through it together.