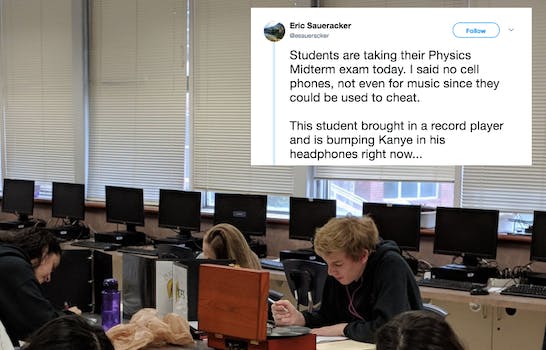 A high school student in Vancouver, Washington, wanted to listen to music during a physics exam yesterday, but his teacher said cell phones were not allowed. So he did what any creative young kid living in 2018 would do: He brought a record player to class.

The teacher, Eric Saueracker of Hudson’s Bay High School, shared photos on his Twitter account of the student, Wyatt Prutch, listening to a Kanye West album on the record player—through headphones, of course.

Students are taking their Physics Midterm exam today. I said no cell phones, not even for music since they could be used to cheat.

This student brought in a record player and is bumping Kanye in his headphones right now… pic.twitter.com/p57iMIal7D

Prutch ended up getting an A.

As a follow up:
@TheItalianPacca did ace the test whilst listening to college dropout…

The best part? He was listening to The College Dropout.

Saueracker’s tweet went viral, and everyone praised the student for his ingenious idea.

The kids are all right. https://t.co/0jqdwnSERE

I aspire to be this fucking petty https://t.co/BkqassxCff

Even Prutch’s brother, who said he bought the record player, chimed in:

This is my brother. I got him that record player.😂😂 https://t.co/hLGhtO2gM9

Although Prutch brought his record player to class with wholesome intentions—just to listen to music—one person had an idea for how students could utilize the device in the future:

Nah you gotta make a recording of all your notes and have it made into vinyl, then just slap that college dropout sticker in the middle. Easy A. https://t.co/M1xDza4Peh