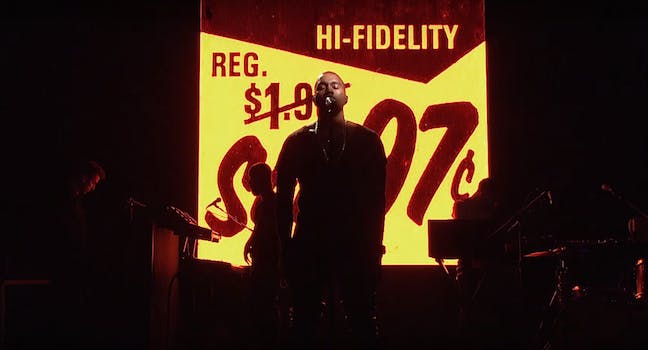 'Yeezus' is West's most misunderstood masterpiece.

It was 2003—early in Kanye West’s career as a writer and rapper. In the documentary Fade to Black, about the making of Jay-Z’s The Black Album, West is in the studio with Jay, playing the beat that would go on to become the song “Lucifer,” and explaining his views on the relationship between albums and movies.

“When I did the Twista song, I was making that shit like it was a sitcom itself, or it was a piece of a movie or something. Say like the The Black Album was like The Black Movie. So the soundtracks are like scores to scenes that’s going on in the movie,” West says. “This record ain’t a record. It’s a movie.”

As a musician who counts artists of every variety as his influences—including directors Stanley Kubrick and Alejandro Jodorowsky—it isn’t a weird comparison for West to make at all. Assuming that West would have needed years to improve as an artist, honing his craft, and developing this style where a movie becomes an album and an album becomes a movie, we would expect to see this aesthetic develop over time. There’s a common theory that it takes 10 years to master a skill: a decade after The Black Album, it just so happened, West released Yeezus on June 18, 2013.

Yeezus is a concept album; a narrative album; a singular story with a beginning, middle, and end following the journey of an anti-hero from supreme arrogance to vulnerable weakness to becoming a cautious romantic.

Despite its critical acclaim, most of the Yeezus conversation revolves around the album’s sound—sonic chaos, an electro onslaught—all talk of aesthetic form but nothing of artistic function. There hasn’t been a formal deconstruction of this story’s themes. There hasn’t been a collective critical evaluation of the true Yeezus.

This probably is a result of two major factors. One, how people perceive West. Two, the techniques that West uses.

West came into the mainstream with The College Dropout (2004) and Late Registration (2005). Both albums that present themselves as a collection of singular, isolated tracks. There’s no intended narrative continuity between “Jesus Walks” and “Spaceship,” or “Gold Digger” and “Crack Music.” West was a singles artist, with huge radio hits, in line with the majority of popular musicians. As this was the first impression of West, many still think of him in that way. Even fans who have followed and enjoy West’s recent work may still listen to My Beautiful Dark Twisted Fantasy, Yeezus, and The Life of Pablo without ever considering their intercontextuality—each album tells an individual story. Some people simply dislike West for his outspokenness, and don’t care to give West the artistic credit.

Part of the miscommunication is West’s fault. He mostly relies on modernist artistic techniques that require listeners to piece together information rather than passively experiencing the presentation of that information. This concept may not be common in music, but it’s something we are familiar with when it comes to novels and movies. It’s easier to read a James Patterson novel than it is a Stephen King novel, and it’s easier to read King than it is to read Virginia Woolf. Similarly, compare a Disney movie to a Spielberg movie to a Kubrick movie. We can sum up these differences as the varying degrees to which each artist “shows” versus “tells.” This determines the amount of subtext there is within a work.

In Disney’s The Lion King, we have a scene where the ghost of the dead lion king Mufasa tells his reluctant and confused heir Simba, “You have forgotten who you are,” then explains why this is important and what Simba has to do next. This lecture summarizes the entirety of Simba’s arc, so that everyone watching will understand what’s at stake and why. Similar moments occur throughout the movie, announcing and clarifying every bit of would-be subtext.

In Spielberg’s Jurassic Park, Malcolm monologues about the absurdity of trying to control nature, then of humans playing God by genetically engineering dinosaurs. What happens later in the movie? An unexpected hurricane comes through and disrupts the man-made systems of the park. The dinosaurs that humans tried to control start killing people. In this case, we aren’t getting the same level of summary that Mufasa gave Simba, instead we have a character not just foreshadowing the plot but framing the main themes, resulting in a little more subtext, as we, the viewers, have to connect what was said earlier to what’s happening now.

In Kubrick’s 2001: A Space Odyssey, there’s no summarizing, there’s no framing. Which is why it’s one of the most confounding movies ever. To find meaning in the movie, value in the story, viewers have to actively piece together many little moments to arrive at the larger intent and value. There isn’t a speech where one character talks about the evolution and impact of technology and weapons from prehistoric tools to futuristic spaceships. But 2001 shows us the evolution of technology from prehistoric tools to futuristic spaceships and artificial intelligence and the impact these things have on humanity.

We can group concept albums in a similar way. Like the examples used above, let’s compare Jay-Z, Kendrick Lamar, and West.

Look at Jay-Z’s 2007 concept album American Gangster. On the first song, Jay-Z tells the story, track by track, of Shawn Corey going from a young, innocent dreamer to a bonafide “American Gangster” (of course this is the name of the final track). There’s no mistaking the narrative intent of the album because Jay took the time to tell us up front.

A similar tale is told by Lamar on his concept album To Pimp a Butterfly. Lamar also opens his album with a young, innocent dreamer, but there’s no “tell” that this will be a story. Instead, Lamar inserts a poem between tracks that accretes lines over the course of the album, until the whole poem is read on the album’s final song, “Mortal Man.” This poem summarizes Butterfly’s entire narrative. It’s a key listeners can refer to as they go back through the album and track the story and themes and how they develop.

By using the poem throughout the album, Lamar clues the listener in on the interconnectedness of the tracks. It’s a twist on the framing we see in Jurassic Park. Instead of coming early in the narrative to prime everyone for what follows, West unveils the complete poem at the end to have a surprise and recontextualize everything we’ve heard.

On Yeezus, there’s no first-person declaration of intent. There’s no summarizing poem or framing dialogue. West, instead, structures the album like a series of movie scenes, following the progression of this hyperbolic and fictional version of himself. We are shown the story of Yeezus, and left entirely on our own to determine what took place, why, and what this all means. Subtext, subtext, subtext.

(West in 2010 released My Beautiful Dark Twisted Fantasy. As part of the supplementary materials, West directed and acted in a 30-minute short film called “Runaway”. This was a companion piece that used MBDTF songs as not just a soundtrack but a kind of narrative spinal column. The dynamic between the two artistic mediums was clearly still on West’s mind seven years after Fade to Black.)

Yeezus is the journey of an anti-hero from supreme arrogance to vulnerable weakness to becoming a cautious romantic. I intend to prove it, over the next few weeks in a series of posts. We may laugh. We may cry. We may argue. Whatever happens, at the end of it all, we’re bound to admit that Yeezus and Adam Sandler’s Billy Madison have more in common than anyone would ever expect.

For more details, you can listen to our podcast overviewing the narrative:

Watching the Throne, A Lyrical Analysis of Kanye West is the No. 1 Kanye West podcast on the internet. Travis and Chris have gone line by line, deconstructing the story and themes of over 70 album tracks—with more to come. This amounts to the largest body of scholarship on West’s discography. In 2018, they will release a book on Yeezus that will be the definitive guide to the album.

All episodes are available on iTunes, Google Music Play, TuneIn, and Stitcher.