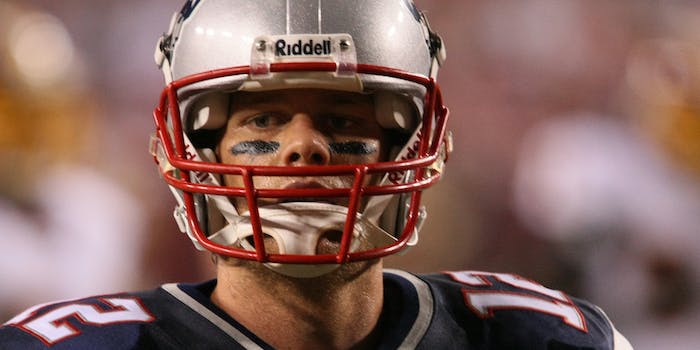 It's time to send a message.

This has been a terrible, horrible, no good, very bad couple years for the NFL. From a Miami Dolphins scandal that exposed the everyday homophobia inside the league’s locker rooms to an ongoing Michael Sam fiasco that further proved the same point, as well a slew of domestic violence charges, America’s favorite pastime is also sporting’s biggest PR nightmare. Adding to its constant generator of controversy is #DeflateGate (or #Billghazi), Twitter’s nickname for yet another scandal surrounding the New England Patriots. According a league investigation, 11 out of 12 footballs from the team’s recent 45-7 win over the Indianapolis Colts were deflated by two pounds, violating the NFL’s regulations.

Two pounds doesn’t sound like much, until you put it into perspective. Yahoo Sports’ Dan Wetzel explains that such a reduction is “16 percent below the legal minimum,” which gives the Patriots a huge competitive advantage. Reports suggest that Tom Brady likes his balls under-inflated, and it’s not likely Brady and head coach Bill Belichick would have been oblivious to the difference. As Wetzel reports, one of the Colts’ equipment men noticed the deflated balls from the opposing sideline. It’s troubling that none of the referees on duty, who would have been handling the ball the entire game, caught the deception; however, it’s even more troubling that the league will likely allow the Patriots to play in the Super Bowl anyway, punished with a fine or a slap on the wrist by taking away draft picks.

Losing a couple college recruits or $100,000 is far from enough to stop the most successful franchise in the NFL.

Losing a couple college recruits or $100,000 is far from enough to stop the most successful franchise in the NFL, a multi-million dollar corporation who can write this off as one of the negative externalities of winning at any cost. In 2007, the New England Patriots were busted for videotaping hand signals from the New York Jets’ defensive coaching team during their opening week contest, in which they murdered the Jets 38-14. Investigations revealed that the team had been engaging in such illegal activity since 2000, and former Rams’ running back Marshall Faulk believes that spying was behind the Patriots’ 2002 win over the Rams in the Super Bowl, the Foxboro-based team’s first championship win. According to CBS Sports, Faulk says “the Pats knew almost everything the Rams ran in the first half of that game.”

Although CBS Sports’ Jason Seidel believes that banning Bill Belichick from the Super Bowl would be enough to send the message that this behavior is unacceptable in the league, this isn’t about one game. #DeflateGate throws into question every game the Patriots have played over the course of Bill Belichick’s 15-year stint with the franchise. The coach, who reportedly “had no knowledge” of the controversy until Monday, took a team led by a sixth-round draft pick and a undrafted wide receiver to the Super Bowl five times and won three times. That might make him one of the greatest coaches in history or an epic cheater, and in the NFL, it’s increasingly hard to tell. Bellicheck is hardly alone: According to NBC Sports, their Super Bowl opponents, the Seattle Seahawks, have “had five players suspended for performance-enhancing drugs since 2011.”

#DeflateGate throws into question every game the Patriots have played over the course of Bill Belichick’s 15-year stint with the franchise.

As my colleague Dominick Mayer pointed out earlier this week, there’s an old saying in the NFL that “if you ain’t cheatin’, you ain’t winnin,’” and it’s time for the NFL to finally take a zero-tolerance policy toward cheating. Although taking steroids might seem on another level than deflated footballs (it’s just a little air, right?), they serve the exact same purpose: winning at absolutely any cost, even if the cost is the league’s integrity. Whether it’s suppressing a video of Ray Rice’s wife getting beaten or collectively shrugging when a team is shown to be half a decade under the influence, the league has let the outlaws of its wild west run amok for too long.

After penalizing Ray Rice for two games proved to change absolutely nothing, the league must do more than pulling Belichick out for one game. Instead, they need to ban the New England Patriots from the Super Bowl entirely. This might seem a draconian punishment to those who argue that the Pats would have beaten the Colts anyway. After whipping the snot out of the Colts in three of their last matchups, Newsweek’s John Walters argues that “Tom Brady and Gronk and the rest of the team would’ve beaten Indianapolis tossing a rugby union ball.” However, Walters says that argument misses the point: “To argue that the under-inflation, or deflation, of the Patriot footballs had no effect on the outcome of the game is to imply that cheating is a necessary evil… Cheating is not a necessary evil, though; it’s a scourge.”

I’m not the first person to suggest ejecting the Patriots from this year’s championship game; ESPN’s Michael Wilbon came to the same conclusion, but such a conclusion has been widely rejected as utterly ludicrous and “unthinkable.” However, the Atlanta Journal-Constitution’s Mark Bradley says that didn’t stop the league from taking drastic measures in the past. Bradley writes, “It was pretty unthinkable that Sean Payton, who’d won a Super Bowl himself, was suspended for a season for presiding over a team that had affixed bounties to opposing players.” It might have been “unthinkable” that NCAA football stripped Penn State of 13 years of wins, blocked the team from four years of bowl games, and imposed a $60 million fine on the organization, but that’s surely less “unthinkable” than abetting a culture of sexual abuse.

It might have been “unthinkable” for Major League Baseball to block former Cincinnati Reds star Pete Rose from the Hall of Fame for betting on baseball or banning eight White Sox players for life after they were accused of throwing games for profit, but that’s exactly what happened. Gambling in the MLB used to be a common practice, so common that author David Vaught says that’s how many players earned a living in the early days of the sport. In The Farmer’s Game: Baseball In Rural America, Vaught claims, “It was very often a winner-take-all event where players would bet on their team to win, and the fans would bet on just about anything they could. Since the players were not really paid a regular salary, the only way they could make any money was by betting, and every game featured plenty of it.”

The early days of baseball were a game without a lot of rules and regulations, but to become America’s favorite pastime, cleaning up the league’s image for a wide audience entailed cleaning up its culture. Throughout its history, Major League Baseball has taken a hard stance against gambling and steroid use; according to Sporting News’ Stan McNeal, its current policies on PEDs “call for a 50-game ban for the first positive test, a 100-game ban for the second, and a lifetime ban for a third.” In recent years, Alex Rodriguez and Miguel Tejada have received respective 162- and 105-game suspensions for using performance-enhancing drugs. But McNeal thinks even that’s not enough. It should be simple: If you’re caught, you’re done. There might be three strikes in baseball, but there should only be one when it comes to steroids.

Why is the idea of taking comprehensive action against the NFL’s most unapologetically crooked team so outlandish?

In Major League Baseball, that doesn’t seem so crazy, so why is the idea of taking comprehensive action against the NFL’s most unapologetically crooked team so outlandish? Simply because it’s never done. As the Major League Football overtakes baseball as America’s most popular sport, Commissioner Roger Goodell has ratings to maintain. 2014’s Super Bowl, in which the Seahawks murdered the Denver Broncos, was the most-watched television broadcast in history, and with the #DeflateGate controversy generating headlines, this year’s contest is likely to surpass it. Who doesn’t want to see the Seahawks take down the most-hated team in professional sports? Even if you don’t care about football and have never heard the name Rob Gronkowski before, you might find yourself wearing a Russell Wilson jersey on Sunday.

Because let’s be honest: There’s absolutely no way that Roger Goodell is likely to do anything more than he has to, simply because letting Andrew Luck’s Colts play instead makes for terrible TV. They simply wouldn’t stand a chance. But while you root for the good guys to emerge victorious and the evil-doers to receive their comeuppance on Super Bowl Sunday, ask yourself this: Who is worse—the team that’s addicted to winning or the league that won’t stop it? In my opinion, the Patriots should beat the Seahawks in a landslide victory next Sunday, one in which every football is deflated to maximum capacity. It might not be the fairytale ending you hoped for, but it’s the one the NFL deserves.