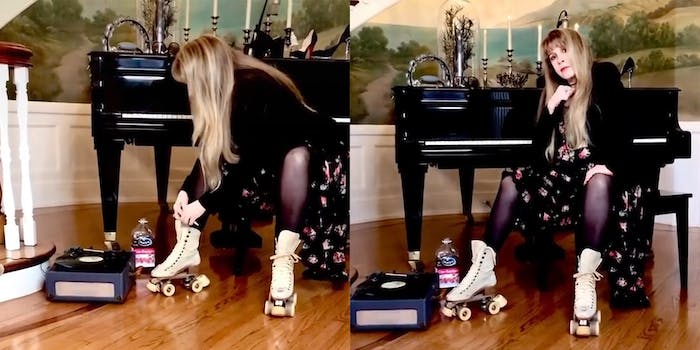 The Fleetwood Mac singer joined TikTok to sing her own song.

Nicks likely joined because of the massive (and continuing) virality of Nathan Apodaca‘s “Dreams” TikTok from late September, which now has more than 50 million views. But her reenactment is a little different: She laces up roller skates instead of jumping on a longboard, and sits in front of a grand piano, a bottle of Ocean Spray cranberry juice at her feet. It’s her only TikTok so far, but it has more than 12 million views.

This has all been pretty great for Apodaca—and Ocean Spray. The company gifted him a truck last week, and photos posted to social media show stores allegedly sold out of Ocean Spray cranberry juice, as people continue to recreate the video. It’s also been great for Fleetwood Mac, whose song is now back on the Billboard Hot 100 for the first time since 1977.

This is a feel-good story, of course, though Apodaca is reportedly already having to deal with copyright issues. It also potentially signals a shift on the app: Older celebs joining to see what all the hubbub is about. Mandy Patinkin is on TikTok now. We’re in uncharted territory.