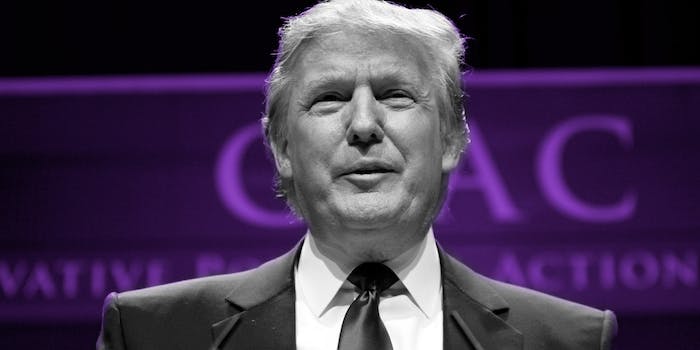 Apparently, Donald Trump scares the hell out of Stephen King.

Stephen King is absolutely not a fan of Republican presidential candidate Donald Trump.

But that hasn’t stopped the bestselling author from pitching what he considered the perfect campaign slogan for the GOP frontrunner and media darling, who will take center-stage at Thursday night’s first presidential debate.

How's this for a Trump campaign slogan: IF YOU'RE WHITE, YOU'RE ALL RIGHT! ANY OTHER HUE, I DON'T TRUST YOU.

King, of course, was referring to Trump’s assertion, made during his campaign kickoff speech, that Mexican immigrants were drug dealers and rapists. King was probably also referring to Trump’s lengthy and ultimately fruitless attempt to prove that President Barack Obama was born in a foreign country.

King later followed up with another Trump comment—or insult, depending on how you feel about Alvin, Simon, and Theodore.

Donald Trump: There hasn't been a novelty act this annoying since Alvin and the Chipmunks.

This isn’t the first time King has set his sights on Trump with Cujo-like authority. As Time pointed out, King also has used Twitter to slam Trump on two other occasions.

Bumper sticker idea: I'M ONE OF TRUMP'S CHUMPS. Jesus, how do I come up with these? Just lucky I guess.

Trump! The raging id of the Republican Party!