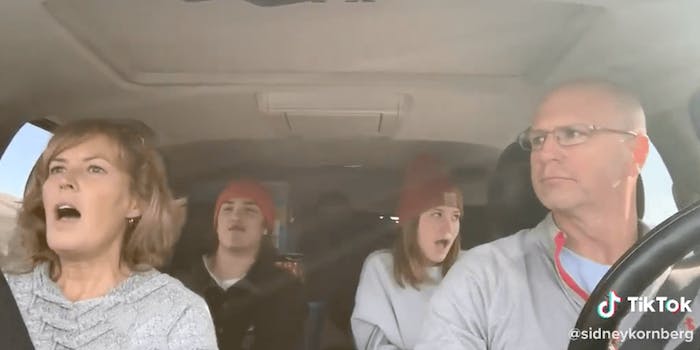 'Bow bow, I'm Derek and I can sing high like this.'

A family has gone viral after using the popular app TikTok to recreate one of the most iconic scenes from the comedy film Step Brothers.

The TikTok video was shared to Twitter on Sunday and has since racked up more than 4.3 million views.

The moment shows the group lip-syncing the scene, in which antagonist Derek Huff, played by actor Adam Scott, forces his family to sing the Guns N’ Roses hit “Sweet Child O’ Mine.”

THIS IS THE KINDA CONTENT I WANNA SEE pic.twitter.com/X0BccEqDgI

Shared more than 84,000 times thus far, the video has been flooded with comments from fans of the 2008 cult classic.

The rendition was so great that many didn’t even notice it was a lip-sync until halfway through the video.

“Okay at first I thought it was their real voice…” Twitter user @Ordinson wrote.

okay at first I thought it was their real voice…

if you don’t know what movie this came from we could never be friends, top 5 funniest movies

Others who may not have seen the film were so convinced that the video was real that they even sympathized with the mother, played by Kathryn Hahn in the film.

“This family is cute af but the dad did not have to do the mom like that,” Twitter user @_mama_bear said.

Some megafans did, however, notice a few minor issues in the back seat.

“It really annoys my OCD that the girl and the boy at the back are on the wrong sides,” Twitter user @Irishgooner1995 added.

Not everyone was a fan of the family’s recreation–but they were in the minority, of course.

“This is the kind of content that I would be willing to pay a monthly fee to block from my feeds,” Twitter user @StevenWRhodes argued.

This is the kind of content that I would be willing to pay a monthly fee to block from my feeds.

I’m sorry but they were mediocre.. imma need a better family to do this!

The video is just the latest gem to emerge from TikTok. We can only hope that recreating scenes from Step Brothers becomes the next big thing.