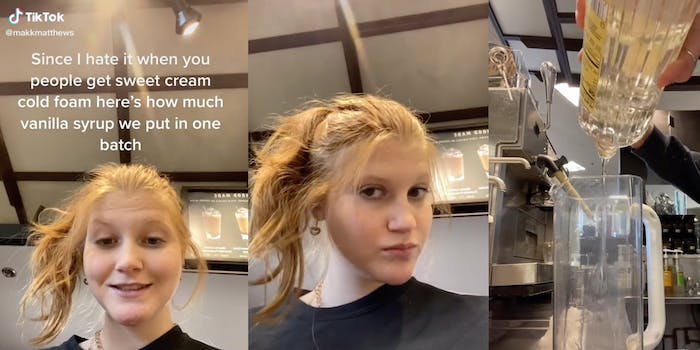 ‘That is too much’: Starbucks barista reveals how much vanilla syrup goes into a batch of sweet cream cold foam in viral TikTok

The foam has become a popular drink ingredient because of TikTok.

Employees at the coffee chain have previously shared that they’re inundated with TikTok-inspired drinks, but this particular trend requires a lot of the store’s vanilla syrup.

In a video, alleged Starbucks employee and TikToker Makenna Matthews pours more than half a bottle of vanilla syrup into a pitcher to make one batch of the foam. The TikTok has racked up over 200,000 views.

One commenter who appeared to be another employee of the coffee chain claimed Matthews was making it wrong.

“Girl idk who taught you to make a pitcher of sweet cream but that is too much… it’s 350 ml for one batch,” they wrote.

“By the comments it’s looking like it’s different at different stores,” Matthews wrote in response. “Idk tho I just work here.”

That said, it didn’t appear commenters were turned off or dissuaded into never ordering a drink with the foam.

“Is this suppose[d] to scare me?” one person questioned.

“Okay and ima still order it lol,” another wrote.

There’s likely plenty of drinks that use this concoction, but an iced white mocha with the foam seems to be one of the latest popular trends fueling the demand.

According to Business Insider, some Starbucks’ workers say they get this order dozens of times per day. One barista in Tennessee, who spoke under the condition of anonymity, said he makes “at least 15” of them each day. “It’s the typical TikTok drink,” he said. “The biggest one.”

Another shift supervisor told Business Insider that they’re used to getting complicated drinks with lots of modifications–thanks to TikTok. “I’m just gonna accept it, and I’m just gonna make them,” they said. “My job was to just make the drinks.”