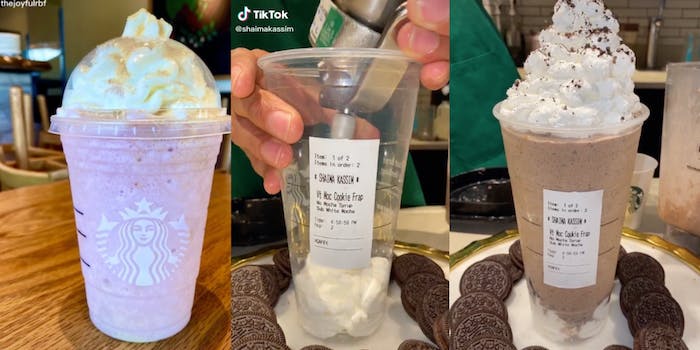 ‘These orders are driving us insane’: Starbucks workers say they’re fed up with TikTok-inspired orders

'They want us to just be these robots that move fast.'

TikTok trends that are inspiring customers to elaborately customize their Starbucks orders are taking a massive toll on Starbucks employees, according to a new report from the Guardian.

“They want us to just be these robots that move fast, we’re just little drones to them that just need to pump out as many lattes as we can in a half-hour,” one employee told the Guardian.

The Guardian report touched on how Starbucks employees have been bearing the brunt of customer misbehavior, which was only worsened during the pandemic due to coronavirus safety standards workers were in charge of upholding.

However, Starbucks employees’ negative experiences have only been exacerbated by increasingly complicated orders, apparently thanks to TikTok. TikTokers are sharing their customized drink orders on the platform, where the content has the potential to be viewed by millions of people.

From “strawberry cheesecake Frappuccino” to “skittles Frappuccino” and “kinder bueno,” TikTokers are seemingly trying to create their own drinks to share with viewers.

In August, TikToker Holly Walker shared with thousands of her followers what she called a “Moana Frappuccino”—a drink based on the Disney character.

“You’re going to start by ordering a grande white mocha cream-based Frappuccino, then ask for strawberry puree, and mango juice to be added and ask for Graham cracker to be put on the bottom and top of the drink,” she said at the time.

One video of an “Oreo Frappuccino” garnered almost 2 million views after it was posted early in 2020. The video asks customers to order a “cookie crumble Frappuccino, no mocha syrup, and sub white mocha.”

“You really can’t go wrong with this drink; it’s one of the most viewed on my profile,” the TikToker said in the video.

The videos even garner more suggestions in the comments.

“Get it made with heavy cream instead of whole milk, tastes even more like cookies n cream!” read a comment by a user who claimed they’re a barista.

Some of the concoctions, such as the strawberry cheesecake Frappuccino and skittles Frappuccino, were shared by Starbucks employees themselves.

Earlier in May, a Starbucks employee was fired after putting one customer’s lengthy order on blast. The order, which consisted of multiple drinks, had a series of customizations for most of them, such as “six pumps chai,” “six pumps vanilla,” and “coconut milk.”

“These orders are driving us insane because they’re so long, so specific and it requires you to do much more work than you should be doing for one single drink and they’re not being adequately translated into our labor hours,” a New York-based Starbucks supervisor told the Guardian.

An average Starbucks customer’s drink costs more than the hourly rate of an employee, according to a Business Insider report from earlier in May.

Orders made via the drive-thru and app reportedly tend to have more customizations. These orders reportedly made up 80% of the company’s sales—and that was before the pandemic, according to the Business Insider report.

But even though the company benefits from these customized orders since they cost more, it is not accommodating the workers for these increasing demands, according to the Guardian report.

In a statement to the Guardian, the company said the experiences of its “200,000 partners” are “key to helping us make Starbucks a meaningful inspiring place to work” and that the company offers benefit programs to its employees.