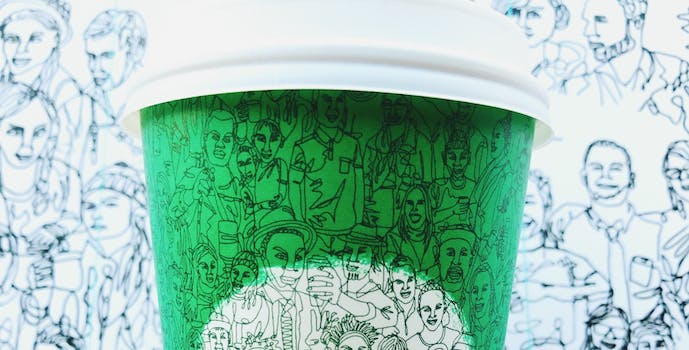 The annual freakout about the 'War on Christmas' is back.

The Chicago Cubs just won their first World Series in 108 years, and the U.S. is about to elect either its first woman president or a guy who’s literally endorsed by the KKK’s official newspaper. Is it any wonder people are freaking out about… Starbucks’ Christmas cups? Sure. Let’s go with that.

A new green cup design is here for the holidays—at least, until Nov. 10, when the red cups will reportedly be making their return—bringing with it our annual fearfest over the “War on Christmas.” The cup features a continuous line drawing of hundreds of different people, and the company says it’s meant as a “message of unity” during “a divisive time in our country.”

Friends, baristas, and customers drawn in one continuous line—reminding us we're all connected. 💚 pic.twitter.com/qspqJc8KWB

Because the times are so divisive, though, conservatives are outraged over the green cup and have accused Starbucks of liberal political brainwashing and “shilling” for Democratic nominee Hillary Clinton. (Their logic being that the concept of unity is liberal, I guess?)

Screw you. My coffee should NOT (and does NOT) come with political brainwashing. I dropped @Starbucks like a hot rock.

anti-2nd, support to a liberal who broke federal law, I wouldn't buy your product if you sold it in a gold cup

@starbucks Stop with your liberal BS, sell coffee and shut up!!! We boycotted the #NFL and we will boycott you too…!!

@Starbucks We all know you are a liberal company but to push Hillary is beyond pathetic. You lost a customer. Trump2016

As if I needed another reason not to buy from these tax dodging liberal SJW's.#NeverStarbucks.

It appears the “War on Christmas” has become the “War on Trump.” This is a more extreme, election-fueled version of last year’s uproar over Starbucks’ design for their winter beverage receptacles: a simple, red cup with the company logo, but no decorative trappings of the holiday season. The controversy was sparked by a trollish video claiming Starbucks had REMOVED CHRISTMAS by failing to put any snowflakes or Santas on the cup, and it was joined by Breitbart and other conservative outlets.

But there was never any real controversy. Most of the buzz about the cups was from people reacting to Joshua Feuerstein’s original video, saying they didn’t care what was on Starbucks’ cups.