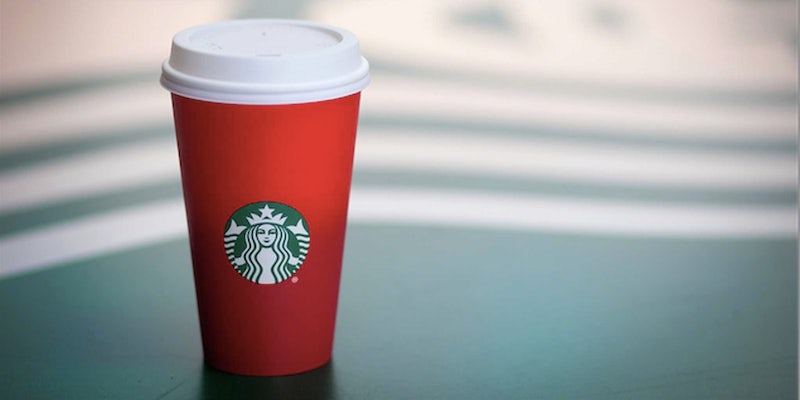 They're just outraged by the outrage.

While you’re sipping your grande, half-caf, non-fat, sugar-free vanilla latte today, be sure to glance down at your cup and remember that Starbucks is waging a war on Christmas. At least, that’s what the Internet would have you think. But an analysis of sentiment on Twitter during the time of the alleged controversy tells a completely different story.

The grand tradition of Starbucks holiday cups started back in 1997. According to the company website: “[T]he Starbucks Creative team tried a new design for its cups to generate excitement during the holiday season. The theme for holiday was Give in to the Rhythm, and the red festive cups punctuated the jewel-toned palette of deep reds, greens, blues and yellows and a jazzy Santa with a profile that evoked the Starbucks siren.” But 17 holiday seasons later, not only is there no jazzy Santa—there’s no Santa at all. In years past, the cups featured snowflakes, snowmen and ornaments on a red background. This year’s cups, which debuted in early November, are a plain, matte red.

One Starbucks customer and devout Christian Joshua Feuerstein from Arizona reacted to the plain cups by taking to Facebook to express his disgust in a video rant titled “Starbucks REMOVED CHRISTMAS from their cups because they hate Jesus.” Feuerstein said in a short video filmed outside his local Starbucks:

“I think in the age of political correctness we become so open-minded our brains have literally fallen out of our head. Do you realize that Starbucks wanted to take Christ and Christmas off of their brand new cups? That’s why they’re just plain red.”

In the video, Feuerstein wears a Christ T-shirt and brandishes his gun while speaking at the speed of a man who just pounded a triple-shot macchiato. He also called on other Christians to share similar content online using the hashtag #MerryChristmasStarbucks.

A Breitbart writer called the evolution of the cups “as disgusting as an Eggnog Latte.” Even presidential hopeful Donald Trump weighed in:

“I have one of the most successful Starbucks, in Trump Tower. Maybe we should boycott Starbucks? I don’t know. Seriously, I don’t care. That’s the end of that lease, but who cares? … If I become president, we’re all going to be saying Merry Christmas again, that I can tell you. That I can tell you.”

It may seem that when Starbucks debuted its new holiday cups, controversy brewed online like a Blonde Roast. But in reality, more people were outraged by the outrage—and the Daily Dot has the numbers to prove it.

Analysis provided exclusively to the Daily Dot by social media analytics and management firm Spredfast shows that from 8:22pm on Friday, Nov. 6 (the day after Feuerstein posted his video) to Friday, Nov. 13, at noon, there was a 131 percent increase in tweets about Starbucks from the week before. There were more than 861,000 Starbucks-related tweets, which peaked at 9am on Tuesday.

Twitter numbers all point to the vast majority of tweets addressing the controversy that never was. Spredfast’s analysis shows that “the most popular content was all derisive of the ‘controversy'” and that even though negative sentiment increased, it wasn’t because people were legitimately angry about the cups. (Spredfast was unable to analyze Facebook data, as privacy settings make it difficult to look at sentiment.)

Your drink from Starbucks will probably taste the same, whether "Merry Christmas" is written on the outside or not.

The real kicker? Spredfast was unable to find “any evidence” on Twitter “of Christians who were genuinely upset about the cup gaining traction.”

Even though the red cup controversy was all much ado about nothing, we’ll let a commenter on Feuerstein’s video named Jesus have the final word:

“How about just celebrate Christmas and let other people believe what they want to believe. A red cup will not stop you from being a Christian…. And writing Christmas on a cup does not make you a good one….. just saying.”