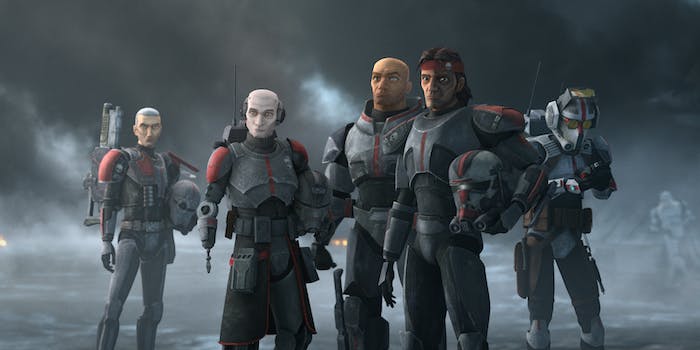 ‘Star Wars: The Bad Batch’ kicks off with a compelling story—and a couple of distracting cameos

The new series explores the aftermath of Order 66 from a group of highly skilled clones.

For a more casual Star Wars fan, Star Wars: The Bad Batch might be a hard sell. It’s an animated spin-off of Star Wars: The Clone Wars, an animated show that many might feel to be too impenetrable to access at 133 episodes and a feature-length film. The titular Bad Batch—aka Clone Force 99, “defective” and enhanced clone troopers who are part of the Republic’s clone army—were first introduced in The Clone Wars’ final season, but their origins go back several years to an unfinished Clone Wars arc. They’re all voiced by one voice actor (Dee Bradley Baker), who is doing the absolute most to make each of them sound distinct. The main villain first appeared in that galaxy far, far away around 44 years ago and has lived a lifetime in prequel stories since.

That supposed entry level for a show like The Bad Batch might seem steep, but you could just go in with knowledge of Revenge of the Sith and be OK. (Their full origins are explored in the first four episodes of The Clone Wars season 7.)

The Bad Batch’s super-sized premiere introduces a ton of intrigue as it explores an aspect of a Galactic Empire we haven’t seen before. Set amid the emerging Galactic Empire and a world that discourages any kind of individualism or thinking outside of the box, it quickly becomes clear that Clone Force 99 won’t fit into the cogs of the Empire’s machine. The Bad Batch opens itself up to fascinating new territory: What does it mean for these clones to witness their brethren unquestioningly following orders to commit truly horrific acts?

But for all of its new ground it covers, it’s also caught in some of the same trappings that many of the more recent Star Wars stories have fallen into. Given The Bad Batch’s place in the Star Wars timeline, it can’t help but make several connections to what else is happening in the galaxy far, far away, but what can be emotionally satisfying can also be somewhat distracting.

At 71 minutes, the first episode of The Bad Batch, titled “Aftermath,” feels more like a movie than an episode of television, although it is officially categorized as the latter. It’s much wider in scope than a regular episode of television, and, like the last season of Clone Wars, the action is exquisitely animated with an intricate amount of detail, and the performances from Baker infuses individuality into the characters. And it kicks off with an event we’ve already seen multiple times: the execution of Order 66.

Order 66—the directive for the clones to murder all of the Jedi for having commited treason against the Republic—is a lynchpin in the Star Wars universe. It’s an emotional and upsetting sequence in Revenge of the Sith as Obi-Wan Kenobi and Yoda escape their would-be clone executioners and Anakin Skywalker, now having fallen to the dark side of the Force, murders innocent younglings. In the final season of The Clone Wars, Ahsoka Tano is forced to defend herself after Rex, the clone she was closest to, turned against her until she was able to remove the chip making him comply with. In the video game Jedi: Fallen Order, you actually play as Jedi padawan Cal Kestis in a flashback sequence as he tries to escape certain death from the clone troopers who once considered him a friend. Basically, if you see a Jedi around a bunch of clones and get some hint about Obi-Wan Kenobi, the Clone Wars ending, or clones receiving communication, shit is about to go down.

That’s very much the case when The Bad Batch used the Jedi padawan Caleb Dume to bring Clone Force 99 into a skirmish against a droid battalion. But it’s also Caleb who sets up the emotional driving force of the episode, which kicks off when the “regs” (non-enhanced troopers) start shooting at Caleb’s master Depa Billaba (Archie Panjabi). Hunter, who isn’t affected by Order 66, goes after Caleb and vows to help him, but Caleb doesn’t believe him—especially when Hunter’s colleague Crosshair started shooting at Caleb with a sniper rifle.

If you’re more of a casual fan, Caleb might be yet another Jedi who somehow managed to escape the clutches of the clones. But if you’re familiar with Star Wars Rebels, you know that Caleb Dume is the former name of Kanan Jarrus, one of the main characters in Rebels; it’s also further clued in by the fact that Kanan’s voice actor, Freddie Prinze Jr., also voiced the younger Caleb, which makes it even more familiar and jarring; while Prinze Jr. does some incredible voice work in Rebels, he’s not as convincing at voicing a 14-year-old.

Logically, I knew Caleb would escape thanks to the nature of prequel stories; there was even a now slightly-retconned Kanan comic book series that depicted his evasion of Order 66. Emotionally, it worked on me hook, line, and sinker. But I still was a bit irked by it. The Bad Batch further wove the connective Star Wars tissue later in the episode when Clone Force 99 was tasked with taking out a group of insurgents—a test by Grand Moff Tarkin to determine the group’s loyalties—only to find the group to be made of civilians and led by Saw Gerrera, who appeared in The Clone Wars, Rebels, and most famously for movie fans, Rogue One. Hunter let them go, but Crosshair took issue at how they defied orders.

Looping these character cameos and Easter eggs into the Star Wars universe has always been a part of Star Wars in more recent years—as has attempting to answer questions that people may or may not have asked. Clone Wars did it with the movies, especially the prequel trilogy. Rebels brought in Clone Wars characters and famously brought one of the most famous Legends characters into the canon. The sequel trilogy revered, remixed and, at times, leaned too heavily on the backbone of the original trilogy. Rogue One gave context to a line in A New Hope’s opening crawl while Solo was an entire movie of canonical explanations with a Maul cameo that left movie fans mostly confused. And The Mandalorian’s second season was a plethora of Star Wars cameos, ranging from Bo-Katan Kryze and Ahsoka to Boba Fett, which was really all a lead-up to Luke Skywalker showing up in the season 2 finale.

These cameos and nods can invoke a lot of emotions. There’s the thrill of recognition, the nostalgia of something you loved, and sometimes, those connections make sense logically and emotionally; other times, they can be distracting—or it might take an explainer before it sets in. It can make a universe as expansive as Star Wars gets just a little bit smaller, and while it’s been a thing in Star Wars for a while (especially the Luke Skywalker one), this one stuck out much more for me. But those cameos, love them or hate them, can also provide a lot of emotional short-hand: It doesn’t take much of a leap to see that Hunter is partially driven to protect Omega (Michelle Ang), a young clone under the care of a Kaminoan doctor who has more similarities to Clone Force 99 than meets the eye, by Hunter’s failure to protect Caleb. And with Crosshair convinced that Caleb is still alive, it’s possible that we might see him pop up again later in the season.

However, the cameos are only part of The Bad Batch’s premiere. The troubles for Clone Force 99, who largely weren’t affected by Order 66 due to their DNA being manipulated (and, in Echo’s case, being “more machine than man, percentage-wise”), are just beginning once they arrive on their home planet of Kamino. Tarkin, already fairly anti-clone, isn’t much of a fan of clones who can think for themselves, going as far as to introduce droids who could kill them during a test of their skills.

Clone Force 99 is a well-oiled machine—Hunter is the leader, Crosshair is the sharpshooter, Wrecker is the brute force, Tech is the mastermind, and Echo is a former reg who’s now part machine—and both the start of the Galactic Empire and the introduction of Omega throw them into a bit of a tailspin. They don’t really know what to make of this precocious young girl, someone who reveres them, warns them to leave Kamino, and wants to go with them on their treks.

She’s also a perfect audience surrogate, a wide-eyed and curious character who immediately latches onto our main group and weaves her way into their hearts, forging a new bond with a found family fractured by the loss of Crosshair, whose inhibitor chip is manipulated so that he’s now fully compliant with the Empire’s ways.

Now seen as enemies of the state, the remaining members of Clone Force go on the run, forming an unlikely bond with Omega amid their escape. While we’ve seen Star Wars characters step up to become a reluctant dad to a very cute child before, what lays ahead of these clones as they begin to question everything they ever knew opens the door to a wealth of potentially rich storytelling.

Star Wars: The Bad Batch series premiere is now streaming on Disney+ with subsequent episodes to debut on Fridays.