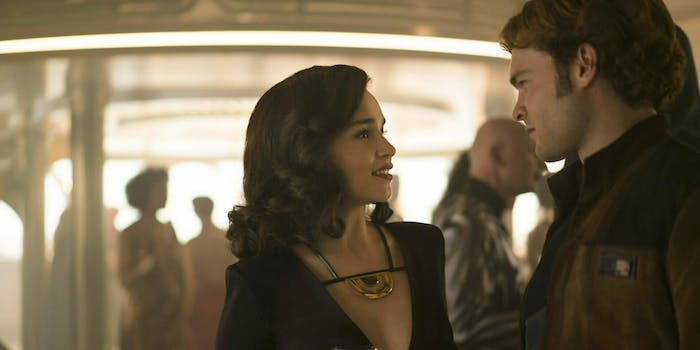 About that very unexpected cameo in ‘Solo: A Star Wars Story’

Seriously, no one saw this one coming.

This post includes a major spoiler for Solo: A Star Wars Story.

Solo‘s secret surprise cameo was somehow even more dramatic than Darth Vader in Rogue One. Not because it was better, but because it was so utterly unexpected. In the final act of the film, we discover that crime boss Dryden Vos (Paul Bettany) isn’t just working for the shadowy organization Crimson Dawn. He’s working for Darth Maul.

This revelation was simultaneously wild (who doesn’t love Darth Maul?) and kind of jarring. Because really, did Darth Maul need to be in this story? Not so much. It may also be confusing for anyone who didn’t watch the Clone Wars animated series because Darth Maul seemingly died at the end of The Phantom Menace. Obi-Wan Kenobi cut him in half with a lightsaber, which seemed pretty definitive at the time.

How did Darth Maul survive?

If you want to catch up with Darth Maul after The Phantom Menace, you need to jump in at season 4, episode 21 of The Clone Wars. The show takes place between Attack of the Clones and Revenge of the Sith, covering the unseen period when Obi-Wan and Anakin Skywalker fought side-by-side against the Sith. It’s considered to be official Star Wars canon, although characters who originated in the animated shows rarely appear in the big-screen franchise.

Season 4 introduces a new villain called Savage Opress, a Dathomirian like Maul. He turns out to be Maul’s brother, and in episode 21, we learn how Maul survived. Medically speaking, he basically fueled himself on sheer spite, which is a very Dark Side move. Focusing on his hatred for Obi-Wan, he stayed alive as his body was dumped on the junkyard planet Lotho Minor. He replaces his lost legs with a spider-like arrangement of robotic limbs but subsequently goes mad from the trauma of his experiences.

By the time Savage Opress shows up to rescue him from Lotho Minor, Maul barely remembers his own name. Opress brings him back to Dathomir to recover, and Maul becomes a formidable enemy to the Jedi once again. He actually survives into the era of Star Wars: Rebels, about five years before A New Hope. Hence why he’s alive and well in Solo. Apparently, in the intervening time between Clone Wars and Rebels, he became the head of a crime syndicate.

In The Phantom Menace, actor and stunt performer Ray Park plays Darth Maul, with Peter Serafinowicz voicing his dialogue. Ray Park returned for Solo, but this time Clone Wars and Rebels voice actor Sam Witwer provides the voice. It’s a fun nod to the animated franchise, although Maul’s return may still be rather baffling to more casual fans.