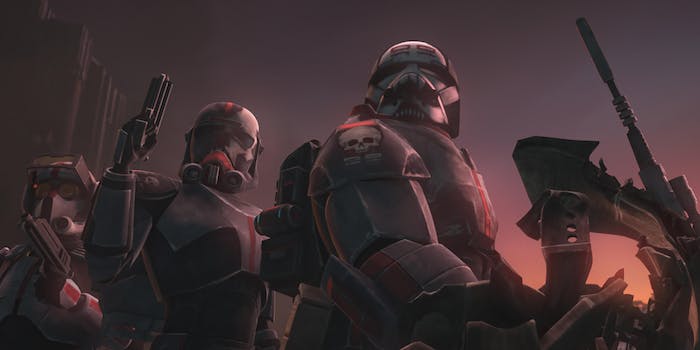 The return of ‘Star Wars: The Clone Wars’ throws you right back into the fight

The final season looks better than ever.

The arrival of Star Wars: The Clone Wars’ final season is the kind of feat the Jedi of old might’ve pulled off. Canceled prematurely soon after Disney’s purchase of Lucasfilm (and with a shortened sixth season dropped on Netflix), supervising director Dave Filoni revealed at San Diego Comic-Con in 2018 that Disney+ would give fans the closure they’d been hoping for after many spent several years campaigning for the show’s revival.

The Clone Wars is also debuting in quite a different landscape in a galaxy far, far away. Since the last batch of episodes premiered in 2014, we got an entire Star Wars trilogy, two standalone films (Rogue One and Solo), two entirely new Star Wars animated series (Star Wars Rebels and Star Wars Resistance), and a full season of The Mandalorian. Based on the first two episodes made available to critics, it fits right into the ever-expanding Star Wars universe with plenty to entice longtime viewers.

While The Clone Wars was always primarily about the adventures of Anakin Skywalker (Matt Lanter), Obi-Wan Kenobi (James Arnold Taylor), and Anakin’s one-time apprentice Ahsoka Tano (Ashley Eckstein) throughout the Clone Wars, it was always a much larger and expansive story, which were often structured like a wartime radio newsreel serials with a brief recap by voice actor Tom Kane as the Narrator at the beginning of every episode. Entire arcs were devoted to the exploits of Maul without the Sith, Yoda, and a regimen of Republic Clone troopers, among others. It’s that last group—which includes Captain Rex, a clone leader who (minor spoiler) makes an appearance in another Star Wars property—that is at the center of The Clone Wars’ first stretch of episodes.

Based on the unfinished “Bad Batch” arc (four episodes in total) that Lucasfilm initially released online in 2015, it’s both familiar to those who’ve seen it while offering a slew of surprises for older and fans unfamiliar with those incomplete episodes alike. And with the focus largely on Captain Rex and Clone Force 99 (who call themselves the Bad Batch), a group of “defective clones with desirable mutations,” as they attempt a high-risk mission deep in Separatist territory.

Visually, The Clone Wars is stunning. The animation encompasses the more sophisticated technology developed in the years since the show’s cancellation (including what we saw in Rebels) but without abandoning the more angular designs of the characters. It’s a bit softer overall, but it’s much clearer and detailed, which really allows the battles and skirmishes in the sky and on the ground to really pop. But the start of The Clone Wars’ final season also, more so than ever, begins to highlight just how far-reaching the war really is and just who, more often than not, is forced to deal with the brute of it.

Attack of the Clones, Revenge of the Sith, and a good chunk of The Clone Wars all zeroed in on the grander story and the struggle between the Jedi and the Sith; if the trailer is any indication, we’re going to get some of those stories, including the long-fabled Siege of Mandalore, in the final season.

But The Clone Wars especially went to great lengths to show viewers the larger cost of war, one that stretches beyond the Senate or the Jedi commanders; when we’ve lost clones we’ve spent several seasons with in the past, we cared. With the final season kicking off from the clones’ point of view, The Clone Wars reminds us that it’s not lost sight of that point. And while we know—thanks to Revenge of the Sith—that Anakin will eventually fall, when he does, we’ll feel all that he’ll be taking down alongside his own humanity even more.