Even if you haven't seen the movie, you'll enjoy these.

The Force might be awakening in the latest Star Wars movie, but so are the meme takes on the franchise’s iconic opening crawls.

Everyone’s familiar with the part at the beginning of the Star Wars (and many other sci-fi movies) where big words in a dramatic font roll over a dark background. There’s some dramatic music, or maybe narration by some off-screen character with an authoritative voice, giving context to the story you’re about to see. Star Wars movies all start with “A long time ago in a galaxy far, far away… ” followed by the Star Wars logo and a prologue.

The Force Awakens naturally had its own introductory crawl. And while longtime fans were glad to see this motif appear in a movie for which they’ve waited many years, the Internet has taken some liberties with it. This meme isn’t anything new, but the latest Star Wars property has inspired its own round of remixes, which draw on various pop culture references to hilarious effect.

Tumblr users have run amuck with the meme, with tons of original crawls emerging since the movie’s opening. Twitter has also joined in on the meme avalanche.

Some of them even move—and some are even related to waking up!

Meanwhile, most of us are on the sidelines, watching the meme explode like: 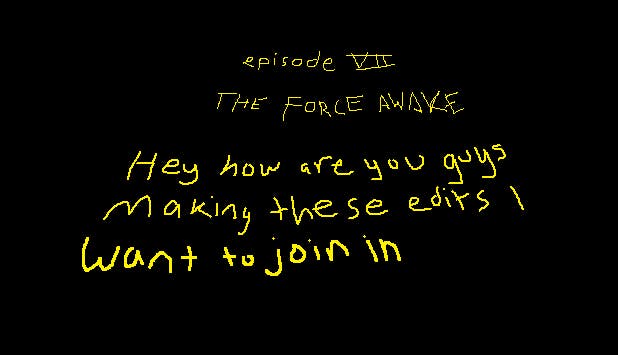