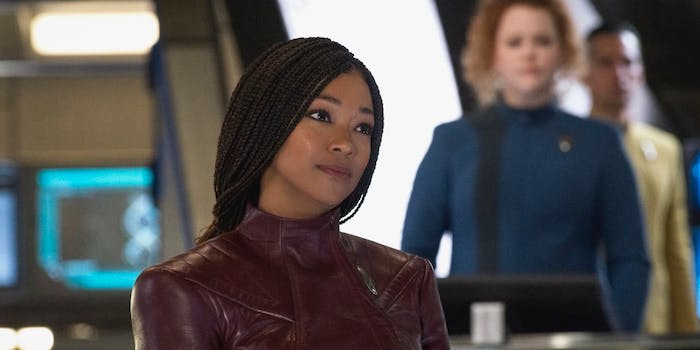 ‘This is how you get pirates’: ‘Star Trek: Discovery’ delayed for international viewers days before premiere, sparking fan backlash

The announcement was news to the cast as well.

The fourth season of Star Trek: Discovery premiered on Paramount+ in the U.S. and on CTV Sci-Fi Channel in Canada Thursday, continuing the adventures of Michael Burnham (Sonequa Martin-Green) and the crew of the U.S.S. Discovery. But plans to air the series internationally were scrapped just days before the premiere, a move that stunned and angered many international Star Trek fans.

For the past three seasons, most of Star Trek: Discovery’s international viewers were able to watch the show on Netflix, which had a licensing deal to distribute new episodes on a weekly basis. (Think how new episodes of The Great British Baking Show are released on Netflix for American viewers.) That was also supposed to be the plan for season 4, which would start premiering new episodes on Netflix starting Nov. 19. Just two days before the U.S. and Canadian premiere of the show, Star Trek: Discovery and Paramount+ quickly veered off-course.

The announcement arrived on Discovery’s official channels Tuesday afternoon as it revealed that audiences outside of the U.S. and Canada would have to wait. Not because of any issues with the show itself but rather because Paramount+ is planning a global expansion next year and is holding Discovery’s release until that expansion happens. The previous seasons were also taken off of Netflix.

For those fans, the newest season would now premiere “exclusively where Paramount+ is available in early 2022.”

“We sincerely thank you all for your patience and support as we grow the Star Trek universe on Paramount+,” the announcement said.

According to Deadline, Paramount+ will launch Discovery in the U.K., Germany, Ireland, Switzerland, and Austra first as part of Paramount+’s launch in more markets.

The move to take Discovery off Netflix and make it fully a Paramount+ property is a branding move and a business move; ViacomCBS wants more people to sign up for Paramount+ and a series like Discovery—with a preexisting fanbase and recognizable IP—would likely be fundamental to doing so.

That doesn’t mean that, for many fans who were anticipating being able to start streaming the series on Friday and now have to spend an indeterminable number of months waiting with only three days’ warning. “Still feels like a mean joke,” tweeted @TheSpaceshipper.

As Anthony Rapp, who stars in Star Trek: Discovery, shared in a thread, the cast of the show found out international fans wouldn’t get to see the show with U.S. and Canadian fans when the rest of the world did.

And some fans even pointed to a problem that is of ViacomCBS’s making: Instead of waiting for a new streaming service to launch to be able to watch the new season, many fans will probably choose to pirate the series instead.

Long waits for international shows aren’t new, although streaming services have helped to shorten the wait or make it disappear entirely. For example, it happened with The Mandalorian, which was held back in several countries to coordinate with their respective countries’ Disney+ launch. But there’s a difference between getting that information months ahead of time and finding out three days before a show is set to launch in your country.

“But knowingly terminate a contract 2 days before the broadcast of a new season, to bring fans to a streaming service that will only arrive in 20 countries in a few months, then 45 countries in a year, while Netflix was broadcasting the series in over 180 countries … lol,” @TheSpaceshipper wrote.

Star Trek: Discovery already has a history of being pirated, and with Paramount+ and ViacomCBS restricting access for the foreseeable future, it’s probable that it will only grow.

We’ve reached out to Paramount+.