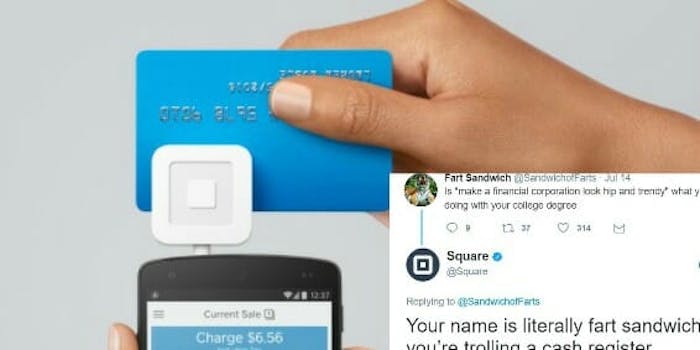 What an explosive argument.

The Square app’s Twitter account is in a social media tiff with an account named Fart Sandwich, and thus far, the mobile payment company is striking enough sparks to ignite a sulfur explosion.

It all seemed to start so innocently. Square was minding its own business, replying casually to a tweet from another user that has since been deleted. And then Fart Sandwich, aka @SandwichofFarts, butted in.

And from there, it was on, as the two accounts ripped one after the other.

Your name is literally fart sandwich and you’re trolling a cash register.

You could probably sell fart sandwiches with Square if that’s what you’re getting at.

That’s when the fight began to fade away. But Square couldn’t stop cheekily rehashing the aftereffects.

If it’s about a fart sandwich, how corporate can it *really* be.

We are all Fart Sandwich.

But in a surprising twist, ANOTHER Twitter account that fancies itself as Fart Sandwich nosed into the conflict. Not surprisingly, Square owned this brand of Fart Sandwich as well with a simple, yet pointed tweet to effectively silence the offending interloper.

This doesn’t concern you, other Fart Sandwich.