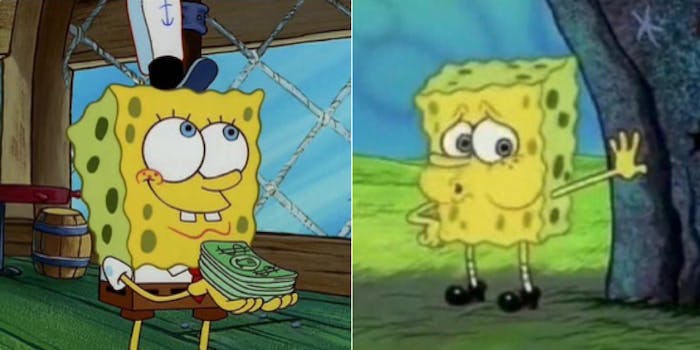 SpongeBob has money problems in his latest popular meme

His problems are totally relatable.

After a month of wildly popular SpongeBob SquarePants memes—Evil Patrick, Krusty Krab vs. Chum Bucket, and Tired SpongeBob—the internet has decided there’s room for just one more. The latest meme pairs the nude, out-of-breath Tired SpongeBob with a new pic of SpongeBob holding a stack of cash. The jokes are all about how hard it is to spend money.

The prototypical Money SpongeBob joke blew up on April 1, and two different versions of it have each been liked 200,000 times on Twitter.

The posters of these jokes are apparently so magnanimous that they love spending money on others, but find it exhausting and stressful to spend on themselves. Good for them! And good for the hundreds of thousands of people who related to the sentiment.

Thanks to this riff, Money SpongeBob has now become part of the SquarePants meme canon. People are using the new image—from a scene where Mr. Krabs gives SpongeBob a paycheck in the episode “Squeaky Boots“—for all kinds of money-related scenarios, but it’s always paired with the Tired SpongeBob pic.

Gents at the club vs paying child support. pic.twitter.com/LefyFWWJAm

In some clever cases, posters have combined the two SpongeBobs with other memes entirely:

if you then you don't
don't love deserve
me at my me at my pic.twitter.com/g9Ww0LZYOG

Although some are expressing exasperation at the emergence of yet another SpongeBob-themed meme, Money SpongeBob is thriving on Twitter. It’s less its own meme and more of a spinoff of Tired SpongeBob that recontextualizes that character in a novel way. Sure, the joke is a little one-note, but it gives the people what they apparently want: more of that infernal sponge.