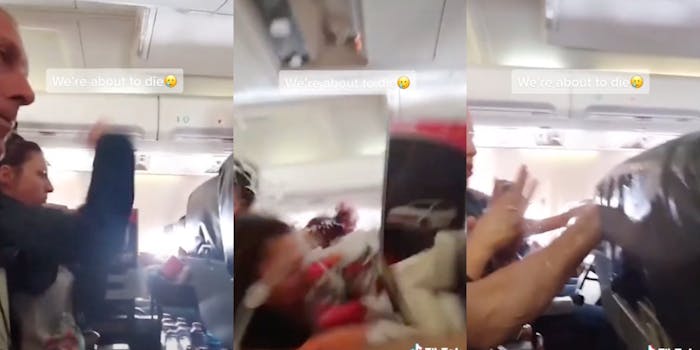 The TikToker re-uploaded the footage in an attempt to garner 20K followers.

A viral TikTok claims to show footage from a harrowing Spirit Airlines experience. Don’t be fooled into following the account pretending to be the original poster of the footage, however: It’s an old clip. And it isn’t even a Spirit flight.

Spirit Airlines is notorious among travelers for long bag lines and poor communication and lots of fees, apparently making it an easy target for TikTok virality.

“Just in case I don’t make it, mom I love you!” the TikToker, user @heygirlurpretty, captioned the video posted four days ago.

The footage shows airplane passengers getting tossed in the air—seemingly held in by their seat belts—while a variety of dining items went flying everywhere. The passengers can be heard screaming and shouting.

The TikToker used the hashtags #Spirit and #SpiritAirlines, seeming to out the airline.

As of Tuesday, the video received more than 8 million views and about 6,000 comments on TikTok. The user has about 18,500 followers on the app.

Violent turbulence aboard a flight from Pristina to EuroAirport Basel on June 16 was strong enough to throw a flight attendant and her trolley to the ceiling and send them crashing down on passengers, dramatic video taken on board shows. Mirjeta Basha recorded this video aboard the ALK Airlines flight. She told the Swiss news site 20 Minuten she was convinced the plane was going to crash. Describing the scene she recorded, Basha said, “A flight attendant slammed her trolley on the ceiling. Cups flew around, some were scalded by hot water.” Basha’s husband was among 10 people who were taken for hospital treatment on landing, the airport said.

Despite the seemingly harrowing experience, viewers were cracking jokes at the airline in the comments.

“Spirit ain’t that bad, just had to use my parachute last time,” one viewer commented.

“POV you forgot to tern on airplane mode on,” another user said.

Judging by the TikToker’s most recent post, saying that they wouldn’t post Part 2 of the experience until they reached 20,000 followers on the app, the video was a publicity stunt. The user also turned off comments on their videos, and the Daily Dot was unable to reach them for comment.