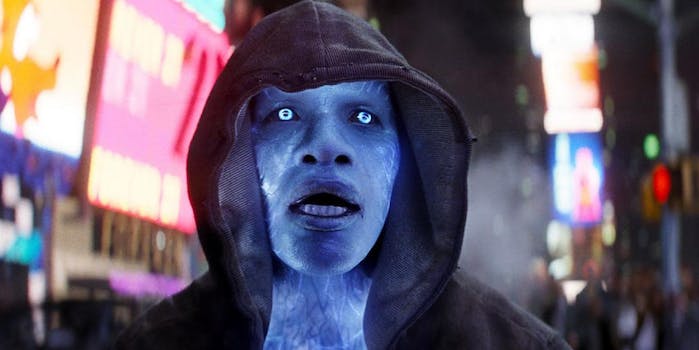 No one wants to download your useless app, Sony.

The Amazing Spider-Man is going the franchise route and getting a spinoff movie of its own.

The Sinister Six will focus on six of Spider-Man’s most notorious enemies, and if you stick around till the end credits of The Amazing Spider-Man 2, you’ll get some hints about who that supervillain team will include.

The only problem is, the only way to access that post-credits info is using an app called Shazam. Which for some reason is a thing that Sony actually expects people to do.

Look, we get where they’re coming from here. They want people to get get excited for a new Spider-Man spinoff, kind of like when the Marvel Studios movies started inserting Samuel L. Jackson mini-cameos at the end of their movies.

Unfortunately, anyone who cares about a Sinister Six movie has surely already googled it, and now knows that the lineup will be Green Goblin, Doctor Octopus, Rhino, Vulture, Kraven the Hunter and either Mysterio or the Chameleon. Why go to the problem of downloading Shazam to learn this information, when you can just find out online? Not the smartest of advertising tie-ins. Also, most people tend to have their phones off at the movies.

Amazing Spider-Man’s advertising endorsements were already totally out of hand weeks before its release date, and this whole Shazam thing makes it seem like Sony are descending into self parody. They are literally using an advertisement for a nonexistent movie to advertise an app that nobody wants, all while encouraging people to switch their cellphones on in a crowded movie theatre. It’s definitely time to cool it with all these desperate marketing ploys, guys.