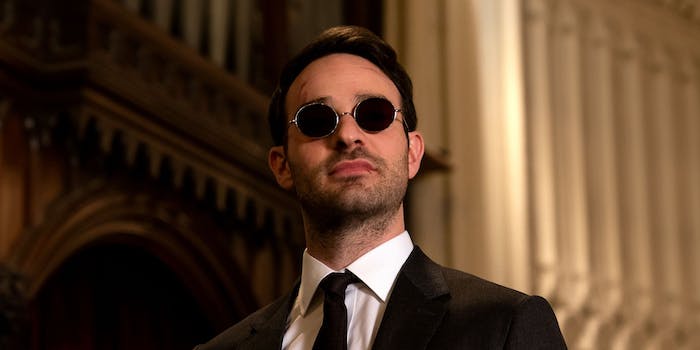 Is this blurry guy in the ‘Spider-Man’ trailer actually Daredevil?

People are convinced that Charlie Cox's Matt Murdock is in 'Spider-Man: No Way Home.'

According to a lot of very hopeful Marvel fans, Netflix‘s Daredevil (Charlie Cox) appears in the new trailer for Spider-Man: No Way Home. However, this is all based on some blurry footage of an unidentified man wearing the most generic outfit ever: a white shirt and suit pants. So, why are so many people convinced that he’s Matt Murdock? And are they right?

Spider-Man: No Way Home is a multiverse crossover event, with the MCU’s Tom Holland going up against two villains from the original Spider-Man trilogy, Doc Ock (Alfred Molina) and the Green Goblin (Willem Dafoe), along with Electro (Jamie Foxx) from The Amazing Spider-Man 2. Tobey Maguire and Andrew Garfield are also rumored to return as Peter Parker and Peter Parker, but despite months of speculation, no one has officially confirmed this is true. Which brings us to the Matt Murdock/Daredevil issue.

The Spider-Man trailer includes a scene where Peter Parker is arrested and interrogated about his secret identity. He’s questioned by two men, one of whom only appears in profile, slamming a folder onto the table. People are speculating that this is Matt Murdock, suggesting that the trailer is carefully edited to avoid revealing his face. However, we’re pretty sure this is not the case, for a couple of reasons.

First of all, while Matt is a lawyer, it doesn’t make sense for him to be interrogating Peter in a scene like this. Matt Murdock would be more likely to defend Peter Parker, whereas the guy in this scene is clearly working with law enforcement, and is acting aggressively towards Peter. He’s probably a detective or government agent.

Secondly, examining these blurry screencaps is a lot like looking at photos of the Loch Ness Monster. You see what you want to see. If you examine Mystery Guy’s face in profile during the trailer, he doesn’t look notably similar to Charlie Cox. And when he bends over the table, he seems to have a different body shape. Charlie Cox is slim and muscular, whereas Mystery Guy is much wider around the waist. In conclusion: Not Daredevil. But congrats to this random man on his five minutes of unexpected fame.