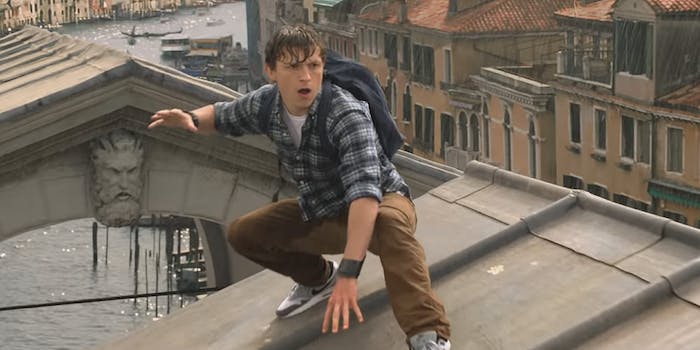 There are already memes for ‘Spider-Man: Far From Home’

'Peter Parker here to pick up a passport please.'

The first trailer for Spider-Man: Far From Home dropped yesterday, and fans couldn’t be more excited.

The short clip teases at all the things that made us fall in love with Tom Holland’s Spider-Man, along with a whole host of new things to get hyped about. Jake Gyllenhaal as Mysterio? Yes, please.

In true internet form, it didn’t take long for the memes to come flooding in.

"Are you going to step up or not?" Watch the #SpiderManFarFromHome teaser trailer now! 7.5.19 🕷️ pic.twitter.com/66d7AYfbnk

There were a lot of fans parsing the short clip to find any hints toward what Avengers: Endgame might have in store for us. What they found, for the most part, was a telling lack of Tony Stark.

Me looking for even the smallest bit of evidence that Tony is alive and ignoring all evidence that shows he’s dead #SpiderManFarFromHome pic.twitter.com/luuZ1KSVMO

People: Here is the evidence that Tony Stark is dead.

Other fans ignored the suspicious lack of Starks and honed in on other parts of the trailer. Namely, how damn cute Tom Holland is as Peter Parker.

Everyone is thinking of theories for this new movie while I’m looking at how precious Tom is #SpiderManFarFromHome pic.twitter.com/Ug2DJoEgIe

Happy Hogan: is that a new dress

Aunt May: yeah how’d you know?

There were a few references to that shocking, heartbreaking Infinity War ending.

Spider-Man looks great for a PILE OF ASHES WTF

And a whole lot of love for that Peter and MJ action.

Many people fell instantly in love with hot Mysterio. Seriously Jake Gyllenhaal, welcome to the MCU.

Lord forgive me for i am about to sin pic.twitter.com/O2wVzjsLsF

First look at Jake Gyllenhaal as Mysterio in #SpiderManFarFromHome pic.twitter.com/QNsMYiUGFB

One user even had an idea for the third installment in the new Spider-Man franchise—Spider-Man: Home Alone.

And for fans who have already rewatched the trailer a dozen times, the international trailer has a whole new opening to enjoy.

New jokes and a different opening may be worth your while in the #SpiderManFarFromHome International trailer
pic.twitter.com/kIAWMmosfz