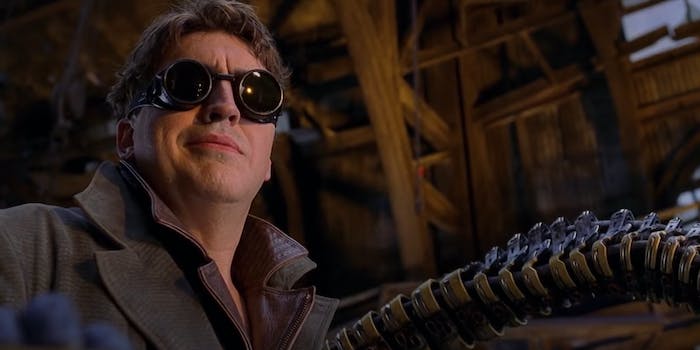 The cast for Spider-Man 3 appears to grow every day as more alum from both the Sam Raimi Spider-Man trilogy and the Amazing Spider-Man joins what looks like the Marvel Cinematic Universe’s attempt to make the Spider-verse happen—or possibly set up the Sinister Six. But the latest casting notices and rumors are leading to even more delightfully absurd fan-casting choices.

Earlier this week, the Hollywood trades first reported that Alfred Molina, who portrayed Doctor Octopus in Spider-Man 2, will reprise his role in the Tom Holland-led Spider-Man 3. He’ll be joining Jamie Foxx reprising his role as Electro from The Amazing Spider-Man 2, and Benedict Cumberbatch as the MCU’s Doctor Strange. And that’s on top of the MCU proving that it could cross the streams by having J.K. Simmons reprise his role as J. Jonah Jameson—who now peddles conspiracy theories and doxxed Spider-Man—in a Spider-Man: Far From Home post-credits scene.

As fans processed that piece of news, Collider reported that Tobey Maguire (Raimi trilogy Peter Parker/Spider-Man), Kirsten Dunst (Mary Jane Watson), Andrew Garfield (Amazing Spider-Man Peter Parker/Spider-Man), and Emma Stone (Gwen Stacy) may return to portray their old characters. Per Collider, it looks as though it’s a done deal for Maguire, Garfield, and Dunst while Stone is still in talks to return.

And then another report suggested Charlie Cox, who portrayed Matt Murdock and Daredevil on Netflix’s Marvel series, would also reprise his role.

Those reports are unverified, and it’s not the first time rumors of Maguire and Garfield’s return to Spider-Man have surfaced. But that hasn’t stopped fans, who can barely keep up with just how many Spider-alum have already been cast in Sony and Marvel Studios’ Spider-Man 3, from coming up with their own choices as to who will join the cast of Spider-Man 3 next.

You have actors who fans once petitioned should play Spider-Man.

A reminder that despite the growing cast, Holland is still set to be in Spider-Man 3.

A DC Comics crossover? Weirder things are reportedly happening in the Spider-verse.

Let’s not forget the unconventional Spider-Men. (And not Spiders-Man, which is a hivemind consisting of thousands of spiders with Peter Parker’s memories after Peter Parker fell into a colony of spiders and appeared to eat him.)

And there were even Star Wars crossovers in the mix.

But with so many Spider-people in Spider-Man 3, here’s hoping we get to see the manifestation of this meme again after Into the Spider-Verse already made it happen in animation.