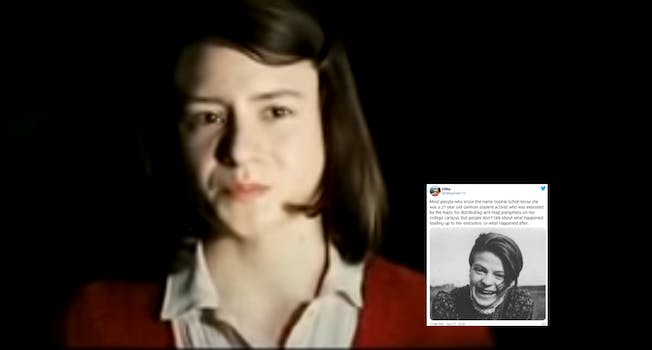 A disturbing story from the 1940s resurfaces.

A thread about a 21-year-old German student activist who was executed by Nazis in 1943 is going viral on Twitter for its relevance to the current racial crisis in America. Twitter user @libbyjones715 detailed the story of Sophie Scholl on Wednesday and the events leading up to her execution. The eight-part thread has amassed more than 16,000 retweets and 36,000 likes.

The story begins by explaining who Scholl and her brother were and describes the incident that led to their arrest. “Sophie and her brother Hans were caught by a university janitor named Jakob Schmid as they distributed pamphlets in a courtyard. He grabbed them, declared them ‘under arrest,’ and turned them over to the Gestapo,” the thread reads.

Once arrested, as the thread states, Scholl and her brother were interrogated for days and then placed in front of Nazi judge Roland Freisler for a trial. The parents of the siblings were not allowed into the courtroom. Shortly after, Scholls, her brother, and their friend Christoph Probst were found guilty of treason, sentenced to death, and beheaded. But another chilling aspect of the story, as the thread mentions, is the role of the janitor.

“No one talks about this janitor, Jakob Schmid. He got a cash reward and a promotion for turning in Sophie and Hans. The University of Munich threw him a celebration. Hundreds of students attended and cheered for him. He thanked them with a Nazi salute,” Libby writes. She then goes to explain that Schmid was later arrested after the war and also put on a trial. This is when he publicly declared that he only turned in the students because “distributing pamphlets was against university policy – it wasn’t because of the content of the pamphlets.”

“When you think of Nazis, you probably think of uniformed officers. But the Nazis were a political party of everyday people. So also think of a janitor tsk-tsking that someone wasn’t protesting ‘the right way.’ A student at a rally applauding him. A judge towing the party line,” Libby continues.

Twitter users found the story to be both disturbing and relevant.

“We like to tell ourselves Nazi Germany was so horrific it could never be repeated. Maybe you don’t personally know someone who would have flipped the switch on the gas chambers. But I can almost guarantee you know a Jakob Schmid,” Libby concluded the thread.

Scholl was a member of White Rose, a non-violent, intellectual resistance group formed at the University of Munich. Student members distributed leaflets and implemented graffiti to denounce the Nazi political agenda. With the current, undeniable rise in racist and unjust acts toward people of color in the United States; and an upcoming presidential election that experts warn comes with legal trap doors that would allow President Donald Trump to retain power even amid an electoral defeat, the opinion that history is beginning to repeat itself makes threads like Libby’s, and stories like Scholl’s, resonate Stateside in 2020.