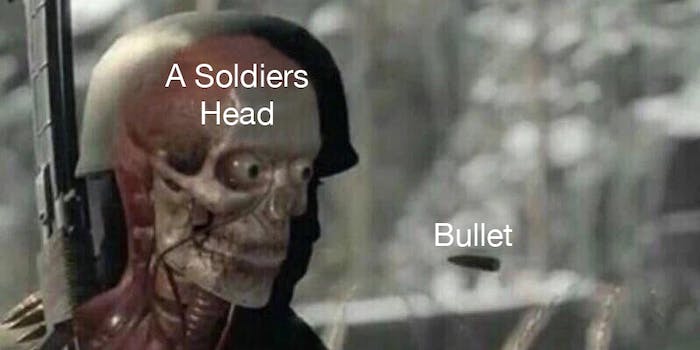 He’s this week’s hot new meme, and he's about to get shot.

A bullet screaming toward a skeleton soldier’s helmet-encased head is the internet’s new metaphor for life. The soldier can represent literally any person or concept, while the bullet represents whatever is perceived to defeat, destroy, or ruin it. The meme is simple, but it’s running rampant on Reddit. And despite emerging in the waning days of April, it’s been entered into a poll for meme of the month.

The skeleton image comes from the video game Sniper Elite 4, which has a “killcam” feature that shows slow-motion, x-ray-like replays of the player’s best fatal shots. The meme appears to have been started by iFunny user new_california_republic, who posted the skeleton and bullet image without context in late April.

Here’s a textbook example of the meme, conveying the idea that separating from the European Union will destroy Britain:

The bullet can also be used as a callback to older memes. This one makes fun of the “Mmm, whatcha say” meme, in which a song by Imogen Heap ruined the serious tone of a death scene from The OC:

This one is about the popular teen joke that George W. Bush “did 9/11,” i.e., planned the Sept. 11, 2001 terrorist attacks. Many of the people who’ve embraced this conspiracy theory as a meme weren’t even alive at the time and thus view the event with ironic detachment.

Here’s one about how Smash Mouth will always be “the Shrek band” because their biggest hit appeared in the movie:

The meme’s success is interesting given that Reddit users typically disdain 9gag as a website for derivative “normies” who copy content from other websites. The bullet meme probably wouldn’t be such a runaway success if the people posting it knew it came from iFunny, but Reddit seems to find the image apt as a medium for commenting on almost anything, including meme culture itself.

It’s functionally the same as the “who would win” meme, which pits one thing against another but plays down the severity of the threat. For example, the black plague (which “would win” against a third of the European population) is reduced to “a few rats with fleas”:

This maps directly onto the bullet meme, with nothing lost in translation. The only difference is that instead of asking a question—”who would win?”—the bullet meme declares an answer.

The meme has also been used to convey the usual edgy jokes glorifying Hitler and school shooters, ironically or otherwise. I’m not going to repost them here, but if you want to see jokes about the Holocaust or Columbine, you can find them on Reddit’s r/dankmemes.

Perhaps the most interesting bullet memes, though, are those that demonstrate the trend of making every new meme literal, meta, or an anti-joke. The metaphorical nature of the meme is stripped away, and the bullet is labeled “bullet,” while the soldier is labeled “soldier” (or “some guy”). The joke—what little joke there was to begin with—is as dead as our skeletal buddy here:

And, of course, there are already bullet memes about how overused the bullet meme is, especially on the dank memes subreddit: