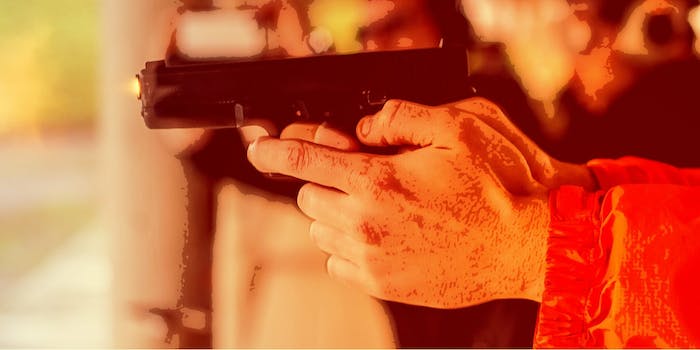 It was a pivotal year.

An attack on the Inland Regional Center in San Bernardino, California, earlier this week left 14 people dead and another 17 injured. It also marked the 355th mass shooting in 2015, and the year isn’t even over yet. That number has already surpassed the 2014 figure—when 336 mass shootings were recorded—and is likely to break the 2013 total. That year saw 363 separate instances of mass killing. Research from Harvard University puts these numbers into greater perspective: The frequency of “mass shootings has tripled since 2011.”

That year was also a tipping point for social media.

Although Biz Stone, Evan Williams, Jack Dorsey, and Noah Glass launched Twitter in 2006, the site would more than double in popularity in 2011, crossing 100 million users by the end of the year. Facebook’s assent to ubiquity was even more staggering: While the site hit the 100 million mark back in 2008, Facebook’s user base skyrocketed to 750 million in 2011; it has doubled since then. And Instagram, a company Facebook would later acquire, celebrated its one-year anniversary that October. The photo-sharing app just reached 300 million users, even surpassing Twitter.

2011 marked the year in which social media became bigger than Facebook, and a number of other sharing platforms—including Periscope and Snapchat—would continue to rethink the ways we share news and content in the digital era. Whereas that was once controlled by corporations and news outlets, social media signaled the death of the gatekeeper. If our instant ability to upload videos to YouTube spoke to an age where we all have the ability to be journalists (see: the Arab Spring protests in early 2011), the access to our own public platforms makes us all information hubs.

The correlation between the social media era and violence should not go unnoticed, especially at a time when the number of mass shootings is at an all-time high in the United States.

The correlation between the social media era and violence should not go unnoticed, especially at a time when the number of mass shootings is at an all-time high in the United States.

While it’s dangerous to scapegoat any individual factor for these horrific killings, social media platforms act as an uncontrolled environment allowing unfiltered information to spread—whether that’s about the killers responsible or the motives that led to bloodshed.

As the University of Arizona’s Sherry Towers explains, that reach can be powerful but also dangerous in the aftermath of deadly attacks. In July, her team published a report suggesting that the attention mass shootings generate on social media—with users often posting pictures of the shooter or footage of the killings, as was the case after an August shooting in Virginia left two journalists dead—spreads further violence. As Newsweek reported on the study, “30 percent of mass killings and 22 percent of school shootings appeared to have been inspired by previous events.”

The Arizona researchers called this effect a “contagion”—a 13-day span where coverage creates a ripple effect. Critics have long pointed the finger at the media itself for this phenomenon. After a 21-year-old white supremacist gunned down 17 churchgoers in a historically black congregation in Charleston, S.C., websites like Gawker, the Daily Beast, and Mother Jones linked to the shooter’s 2,000-word manifesto, but these days, you don’t need the media to hunt down the justification for mass violence. You can find it yourself. In the wake of the 2014 shootings in Isla Vista, the young killer posted a video message to YouTube outlining his twisted logic.

I agree with the spate of think pieces suggesting that news outlets take responsibility for how they cover mass shootings by not saying, or downplaying, the shooter’s name. As the Los Angeles Times’ Melissa Healy argued, mass shooters are often motivated by the attention—or “infamy”—that they receive from becoming a household name. But the burden can’t lie with journalists alone. After the Umpqua, Oregon, shooting in October, Douglas County Sheriff John Hanlin said he would not utter the killer’s name, arguing that putting him in the limelight would “glorify his horrific actions and serve to inspire future shooters.”

Social media doesn’t have to be a contagion; in fact, it can be part of the cure. Outrage and empathy, as we’ve seen, can be a particular gift to the families and loved ones dealing with violence, but the best thing we can do for them is to do our part by keeping the stories of the victims alive. Whether you believe that such events are a result of America’s complicated relationship with guns, mental illness, or domestic terrorism—as news outlets are alleging following the San Bernardino attack—we need to further a culture that values human life, not the people who take it away.

If this is the 355th shooting this year, it’s also the 355th time we’ve failed the victims of these killings by continuing to have the wrong conversation about violence in America.