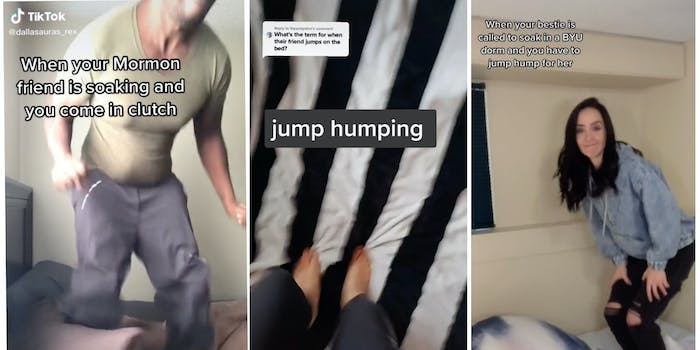 Soaking, the sin-free Mormon sex trend, has made its way to TikTok

Mormons have a reputation for both sexual repression and coming up with creative loopholes that let them have sex without technically having sex. One of these sexual innovations, soaking, is going viral after appearing on TikTok. Soaking is where a penis goes into a vagina and then both parties hold very still together. Apparently, God can’t see your sin if you’re not moving about.

Also known as marinading or floating, this frustrating-sounding not-sex act apparently stays within the laws of chastity because for sex to count as sex, certain movements have to be made by the fornicating couple. Just putting a penis in a vagina isn’t enough, according to soaking’s proponents. For it to actually qualify as sex you also have to wiggle it around a big. The trend apparently became popular at Brigham Young University in Utah.

Things get a little wilder when some couples bring in a third person. Known as bed jumpers or provo pushers, these helpful and very supportive friends come in and either jump on the bed or lay under it rhythmically pushing on the mattress, because apparently motion provided by a third party also doesn’t count as sex. This way, the soaking couple can get a little bit of friction and rhythm going and everyone still goes to heaven at the end of it.

Though soaking has actually been around for quite some time, it had managed to remain blessedly obscure, so much so that even some Mormons had never heard of it, until the secular side of TikTok ran into ex-Mormontok and suddenly had a whole lot of questions.

Some Mormons and former Mormons even think it’s an urban myth and not something people actually do. Others suspect it’s not really a trend but that now, having heard the rumors about it, some young people are going to go ahead and try it.

Of course, like most sex loopholes, soaking does actually count as both sex and sin according to the church authorities.

But this doesn’t seem likely to put a stop to soaking and other sex-loophole hijinks any time soon.