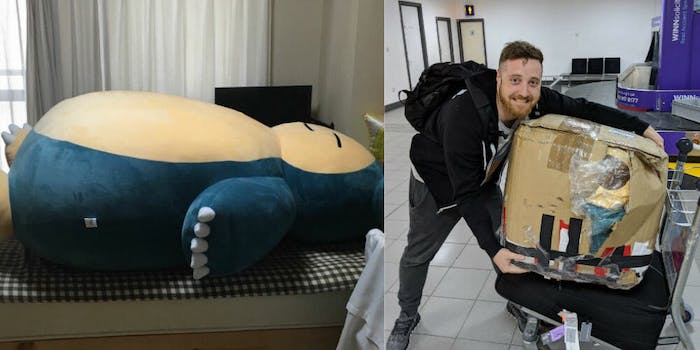 Where's a Pokèball when you need it?

We’ve all done drunken things we regret after the fact—from useless items we bought spur-of-the-moment, to things we wished we hadn’t said, to intoxicated escapades we’d rather forget in the light of sobriety. For Twitter user @DevRelCallum, whose real name is Callum Underwood, his drunken regret came in the form of a $150, 17-pound, 4-foot-tall Snorlax plushie, delivered halfway around the world with no obvious way to get such a big boy home.

Underwood’s dilemma began back in October when he browsed the internet under the influence and fell in love with the Pokémon plush. The problem was, all the suppliers he found only delivered to America—and he lives in England.

But in a fit of inspiration fueled by lowered inhibitions, he had a giant plush delivered to his stateside friends at The Sweet Farm, a sanctuary in San Francisco that typically houses animals but, for his purposes, would make a great temporary home for his large boi.

That proved to be the easy part, as Underwood soon found out—though not before ordering the plushie—that shipping the thing to his Newcastle home would easily cost $1,000. He turned to Twitter, desperate for solutions and posting pictures to prove just how massive an undertaking he’d gotten himself into.

Several users suggested he just buy his new friend a plane ticket, but Underwood worried the plush would be too wide to even fit in a seat properly. Others floated the idea of cutting it open to remove the stuffing, shipping each component separately (or wear the Snorlax “skin” as a suit, one Twitter user who totally isn’t a serial killer suggested), and re-stuffing him back in the U.K. After traveling to San Francisco in November, Underwood told the Daily Dot, he’d planned on going through with this option, even making it into “Snorlax unstuffing party.”

But, he said, “I couldn’t do it to him after seeing him!”

Exasperated, Underwood decided “yolo” and tried to check the plush as luggage on his flight home last week, only slightly fibbing to airport staff by calling it a large cushion.

Tragedy struck as Underwood’s sweet boy got stuck in Dallas on their way to Atlanta, and when he went to retrieve the package, he found the plush starting to bust out of its box prison with no way to tape it back up.

Before he could make his final journey across the pond, though, the Snorlax would come face to face with TSA agents as Underwood was finally forced to explain exactly what he was traveling with.

The TSA had a sense of humor that day, though, calling Underwood’s boi an “absolute unit” and even letting him get in one last snuggle before the last leg of their journey.

On Monday, Snorlax finally made it to Underwood’s home safely, though its box was looking a little worse for wear.

Underwood told the Daily Dot that as the big boy begins its slow process of re-expanding, he plans to stow it in his home office as the perfect snuggle buddy. That is, if he can keep his 2-year-old from stealing it.