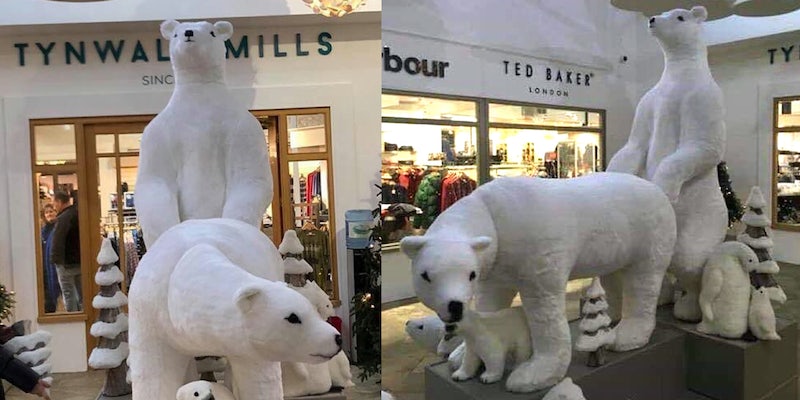 The Tynwald Mills shopping center on the Isle of Man (the self-governing island located between Ireland and Great Britain) has issued an apology to “to anybody offended by our somewhat interactive display” which featured a couple of polar bears who seemed to be… um, physically displaying their affection for each other… doggy style.

There was even another bear positioned in the corner watching the couple like some sort of perverted bear voyeur.

What about this guy watching? pic.twitter.com/XZl8V4Z5fT

The vast majority of people, at least online, found this to be very amusing.

Reminds me of this one. pic.twitter.com/sT7SxWybVl

I laughed so hard I gave myself a stitch
I showed my husband and he just “looked” at me ….

On Sunda,y Tynwald Mills issued an apology via their Facebook account. The post seems to imply that a clever vandal, and not a company employee, was responsible for the saucy scene.

“We’d like to thank our customers for getting a little too into Christmas this year with our Polar Bears in the atrium,” read the post, “and can reassure you the display has changed somewhat since setup. Apologies to anybody offended by our somewhat interactive display.”

A tweet posted Liam Rice, a man who raises funds for the Isle of Man chapter of the SPCA, seemed to get the most attention for his tweet about the display, gathering nearly 6,000 retweets and over 22,000 likes. Rice announced that presumably as a reward, someone from Tynwald Mills has made ManxSPCA their charity for January.

Another update!! So somebody from tynwald has seen the tweet and has just chosen the @ManxSPCA ( where I work) for their chosen charity for January!! They charge 10p per bag and at the end of the month they will be donating to us!! ❤️

Which of course is very nice news for dogs, cats, and other household pets.

As for polar bears, well the International Union for Conservation of Nature (or IUCN) list them as a vulnerable species, so maybe whoever set up the display just wanted to encourage the bears to keep breeding. We’re sure any bears who happened to stumble across the scene found themselves in an amourous mood.