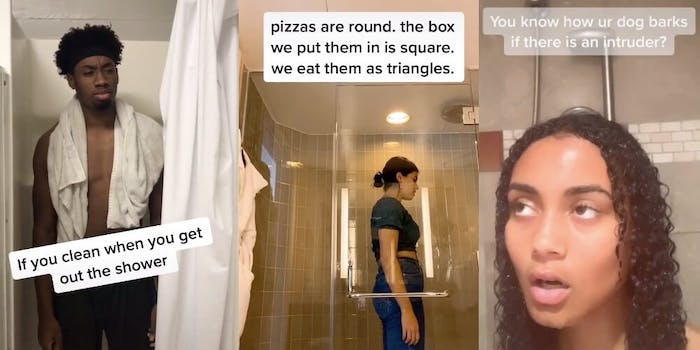 You know those brilliant ideas you have in the shower? Other people have them too.

As people lather on the soap in the shower, they’re also apparently having strokes of geniuses. Now, they’re sharing their “shower thoughts” on TikTok with relatable videos.

Along with the viral hashtag “#showerthoughts,” people are sharing the weird and brilliant ideas that pop in their heads as they scrub their feet and massage in their hair conditioner.

The responses are varied–from deep realizations about belly buttons to happy meals.

Some people’s shower thoughts were about the shower itself.

“If you clean when you get out the shower, how does your towel get dirty?” TikTok user @itsreebaby_3 questioned.

And as always with social media, some people’s TikTok shower-thoughts videos got political.

“If guns kill people, then aren’t pencils to blame for getting wrong answers on a test?” TikTok user @matowelie asked.

And at least one person is spending too much time in the shower thinking about the animated film The Incredibles.

Despite the jokes, there’s actually a reason people are coming up with their “best” ideas in the shower. Taking a warm shower increases the flow of dopamine in your system, according to Lifehacker. The article details how increased dopamine levels and relaxation can lead to more creative thoughts.

So if you’re in need of a life-changing realization, try hopping in the shower. You just might realize that The Incredibles characters’ hair colors don’t match up.