The 'she was his queen' meme is crazy, it's fearless, and it's everywhere.

You’ve been seeing it everywhere—scribbles in notebooks, mutterings to yourself as you fall asleep: “She was fearless, and crazier than him. She was his queen, and God help anyone who disrespected his queen.”  It’s unforgettable. But who is she? Who is he?

Why is this a meme?

As New York Magazine’s Select All reported last week, the “she was his queen” meme started with Jared Leto’s Joker and Margot Robbie’s Harley Quinn in the so-bad-it’s-good movie Suicide Squad. 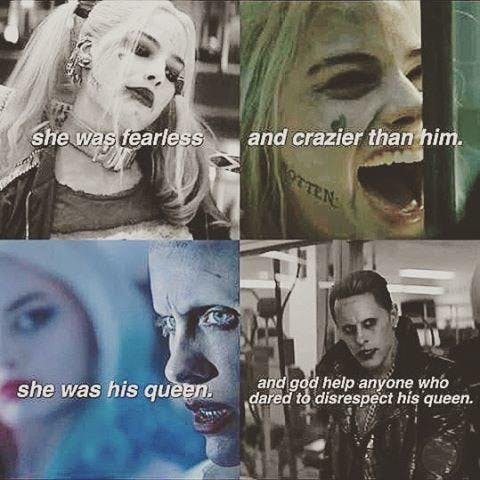 The actual line, delivered by the agent who assembled the Suicide Squad, is, “They became the King and Queen of Gotham City, and God help anyone who disrespected the Queen. She was crazier than him, and more fearless.”

The quote made its way into a slew of cheesy Joker/Harley fan art on Tumblr and Instagram, but it was so ridiculous that it soon took on a life of its own. The bad line was stripped of its original context, lost the “Gotham City” bit, and began a new life as a good meme.

You can apply the “she was his queen” meme to any couple of people or things, especially if they’re OMG totally twisted, like the Leto Joker. A lot of the entries are Photoshopped, and many of the king-and-queen pairs are same-sex. You can put green Joker hair on one of them, or not. It’s whatever. In general, this is a clever format with a lot of room for creativity.

She was fearless and crazier than him she was his queen and God help anyone who dared to disrespect his queen pic.twitter.com/j2G1u5Ou6o

she was fearless and crazier than him
she was his queen, and god help anybody that dared to disrespect his queen pic.twitter.com/luQduKqty0

she was fearless and crazier than him. she was his queen, and god help anyone who dared to disrespect his queen. pic.twitter.com/iLRG1Kw9k0

She was fearless and crazier than him. She was his queen, and god help anyone who dared to disrespect his queen. pic.twitter.com/kHGorZKhmU

It can be a semi-sincere declaration of love, a sick burn, or a sarcastic joke, depending on the context. Post yourself and your king or queen. Post someone obnoxious with someone else who is also obnoxious (Trump/Kanye 2020). Just post … Minions, or something. It’s truly all-purpose.

The meme also overlaps nicely with “wow queen you’re so beautiful,” a piece of bad fan art of Max Goof and Roxanne in A Goofy Movie, as various internet comedians have noted:

“His queen” got most of its virality through the power of fandom, but it’s sticking around because it’s such a good, universally applicable template. You could pick any two images, slap that maudlin phrase on top, and have a decently funny joke. Expect this meme to stay hot through the early part of 2017, and expect it to become more abstract as people start to forget Suicide Squad ever existed.