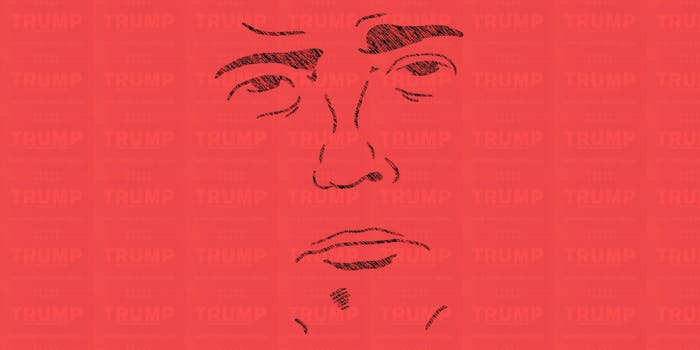 Please, you have to be Sexy Donald Trump for Halloween this year

It's what's inside the mask that matters.

The following is the full text of a speech given by Donald Trump on Halloween morning, 2015*. It was delivered in the lobby of a very tall building with Trump’s name emblazoned in giant gold letters on the front.

Hello, thank you for your applause. You are all appropriately kind.

From this question, I could already tell that she’s a very smart woman, very bright. I know she’s going to vote for Trump instead of those other losers. That’s not even a question. But what else can she do? So I told her, I said, you can wear the best, classiest Halloween costume on the market this year: sexy Donald Trump.

This costume may be billed as “Donna T. Rumpshaker,” but everyone knows it’s Trump. The people behind this costume are making a mint because Trump is such a big name. Everyone wants a piece of Trump and, you know, that’s fine. I’m a generous, humble guy. People tell me every day about how generous and humble I am, a message I feel it is important to personally pass along to the American people as often as possible.

The sexy Donald Trump costume is great. It’s the best.

It’s better than a sexy Jeb Bush costume. He’s fading in the polls, and we’ve had people dressing up in sexy Bush family costumes since the late 1970s. It’s time for a change.

Sexy Hillary Clinton? I can’t even with that.

Sexy Megyn Kelly? That terrible excuse for a journalist thought she could ask Trump gotcha questions. She didn’t know that everyone in America would support me, just as they always have.

Sexy Univision anchor Jorge Ramos? He called me a racist just because I said the United States was being ruined by immigrants of his ethnicity. I’m not a racist, he’s the racist.

A sexy NASCAR driver? That company put itself in the slow lane after it severed ties with Trump for my supposedly racist statements.

A sexy Macy’s cashier? That company put itself in the slow checkout lane after it severed ties with Trump for my supposedly racist statements.

Sexy Rosie O’Donnell? She’s disgusting fat slob whom I will never ever, ever stop hating.

I’m sorry. I just. I’m just trying so hard. Every day, I’m trying so hard—and nobody sees it. They think everything I do is just Trump being Trump, that it’s simple and effortless and natural. Well, it’s not, okay?

Everything I do is me trying as hard as I can every single day to fill this hole that’s inside me.

I woke up one morning, I remember it like it was yesterday. I woke up one morning when I was 12 or 13. It was winter in New York, a blanket of snow had covered the city, and I remember looking out the window and feeling something suddenly break inside me. It was as if someone had pulled the stopper out of a full bathtub and the water was swirling out… I don’t know exactly, just an emptiness.

Every day, for the rest of my life, I have struggled. I know I’m not alone in this. Lots of people feel hollow. Most of them put drugs and alcohol inside their bodies, but that’s never worked for me. I’ve never had a drink in my life. Instead, I’ve tried other things. I took my dad’s real estate empire and turned it into something massive. I surrounded myself with piles of money, but all that wealth always stayed on the outside. It was never me, it never did what it advertised—make me, for a single solitary moment, stop hating how I constantly feel just slightly out of sync with the world.

I tried filling the void with celebrity. I went on TV. I wrote books. I made it so people across the globe knew my name, which I put on the front of buildings in font so large not even God could ignore it. And it still… it was nothing. It wasn’t love. It wasn’t the pure, uncomplicated love that I see other people experiencing every day, just one human being to another, from which I am for some inexplicable reason forever separated.

You know, I don’t even really like being mean to people, insulting them? You think I don’t realize it’s petty and juvenile? I’m trying to become the most powerful person in the free world, and I throw a giant temper tantrum when a debate moderator asks a question I don’t like? Come on, I’m more self-aware than that. People think I’m an arrogant jerk, so I play the role, and then they laugh and clap and look at me. That attention, well, it makes me feel a little less empty, if only for a moment.

Running for president is just me trying to keep the loneliness at bay. It’s a cliché, I know, but that’s all it really is. The love that people have for their politicians, when they even feel positively about them at all, isn’t uncomplicated. Far from it—and I understand that. It’s a poor substitute for whatever I’m missing, the sort of cheap knockoff produced in a Chinese factory. China, as you know, is our greatest threat because…

Listen, whatever deep dark fear you have about China or Russia or watching your only daughter drown in poverty because some poor, brown slob is sinking into a pit of his own self-indulgence and thinks grabbing onto the pant leg of your beloved little angel is his only life preserver, just put those words in my mouth. You know them better than I do.

I’m just saying what I think you want to hear. It’s a deal I made with all of you in my head as I was riding down the escalator all those months ago to announce my candidacy. I’ll be the mirror to your deepest, darkest fears—the ones you’re afraid to say out loud because you’ve been told they represented something ugly. And, in exchange, you just give me your attention. Love is a lot to ask for, but Trump will settle for attention, even if it’s dressed up as mockery.