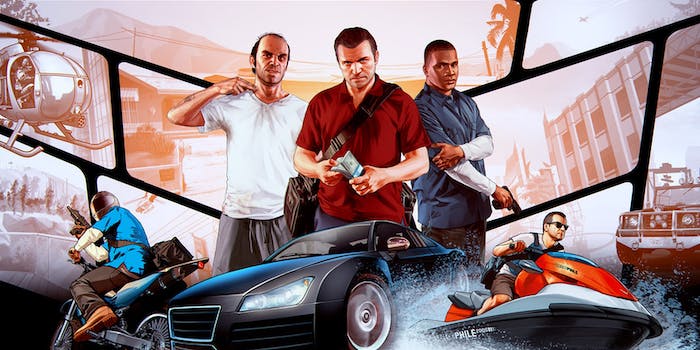 How sexism in video games furthers violence against women

Why does it matter if sex workers are killed or abused in video games? It’s all just fun and fantasy, right?

From Grand Theft Auto to Red Dead Redemption, some of today’s most popular video games reward players for acting out violent fantasies against sex workers. In real life, however, the violence that sex workers often face is no game. So are these violent depictions harmless fun or a dark reflection of our societies attitudes towards sex work?

The latest installment of feminist media critic Anita Sarkeesian’s YouTube series “Tropes vs. Women” explores the theme of sexualized violence against women in video games. She highlights a particular type of “sexualized” non-playable female video game character that she argues are placed in games for players to do what they want with, often violently. As Sarkeesian puts it, these characters are “frequently programmed as minimally interactive sex objects to be used and abused.”

As with the rest of her “Tropes vs. Women” series, Sarkeesian does an excellent job deconstructing the gendered stereotypes that pervade contemporary video game culture.  But what Sarkeesian fails to note is that these games portray violence not just against women characters generally—but specifically against characters that are sex workers. This particular detail is important because in real life, sex workers are regularly seen as either criminals or victims, and the violence they routinely experience is largely ignored, even excused, by our society.

Violence against sex workers takes many forms, from police abuse to murder. In a survey conducted by the Sex Workers Project published in 2003, 27 percent of New York City-based sex workers had experienced violence at the hands of law enforcement. A 2008 study conducted by the Alliance for a Safe & Diverse DC found that more than 50 percent of sex workers who went to the police for assistance were either ignored or further abused by officers.

This marginalization furthers the abuse that sex workers already face. A study published in the American Journal of Epidemiology in 2004 concluded that “women engaged in prostitution face the most dangerous occupational environment in the United States.” According to researchers, “active prostitutes were almost 18 times more likely to be murdered than women of similar age and race,” during the time period of the analysis.

In light of the all-too real violence sex workers face in the United States, the examples of violence against sex worker characters that Sarkeesian cites are especially shocking and disturbing. For example, the game Absolution features a mission in which the “player can create a diversion by picking up and dumping the dead body of an exotic dancer near police officers.”

And Sarkeesian describes how in the Grand Theft Auto franchise, “you can buy a prostituted woman, use her for sex, gain the health and stat boost, then murder her to get your money back.” In the critically acclaimed Red Dead Redemption, players can earn a special achievement trophy called “Dastardly.” The reward is unlocked when the player places a hogtied sex worker on the railroad tracks and then watching as she is run over.

Perhaps this kind of violence in video games shouldn’t be surprising—after all, it’s no secret that misogyny is a problem in the gaming industry. A study of gender inequality in gaming found that nearly 70 percent of women—as opposed to about 7 percent of men—obscured their sex in order to prevent harassment.

In 2012, the hashtag #1reasonwhy was born when role-playing gamer Luke Crane asked Twitter why there are so few female game creators, and thousands of women from the gaming industry responded with tales of vicious sexism they had experienced. Sarkeesian herself was the target of rape and death threats from members in the gaming community when she opened a Kickstarter to raise funds for her series about female representation in video games.

But as Sarkeesian’s series highlights, people are increasingly getting sick of the sexist status quo in gaming. In what PC Gamer’s Tom Senior called “the most important moment at the Game Developers Coference in 2014,” programmer Manveer Heir received a standing ovation for a talk he gave entitled: “Misogyny, Racism and Homophobia: Where Do Video Games Stand?”

But why does it matter if female characters are killed or abused in video games? It’s all just fun and fantasy, right?

There has long been a debate about the social effects of video game violence. Just last year, President Obama and congress provided the CDC with $10 million for research on the impacts of video games on violence after the Sandy Hook shootings. The fact is, today’s video games are increasingly realistic and interactive, which some researchers say may be normalizing violence or hampering empathy in some players. A recent in-depth study that came out of Canada’s Brock University suggests that prolonged exposure to violent video games can weaken empathy toward others.

And gaming is now a major economic and cultural force, whose cultural influence should not be underestimated. According to a story from NPR’s Planet Money, Americans now spend more on video games than they do buying movie tickets. Last year, Grand Theft Auto V set a record when it earned $1 billion in three days.

Portraying violence against sex workers in video games can inform how people think they can treat them, reinforcing a culture that already regularly denigrates sex workers. Continued criminalization and stigma create a cultural atmosphere where sex workers become seen as disposable and less than human.

Take the case of Ezekiel Gilbert, who was acquitted in Texas last year for shooting an escort who refused to have sex with him after he paid her $150. Or the case in New York where a Queens defense attorney said the hefty sentence his defendant wasn’t justified because he murdered Amanda Gonzalez-Andujar, whom he met through an ad. The lawyer said and that such a sentence should only be reserved “for people who are guilty of killing certain classes of individuals.”

This spring, the dead body of 21-year-old Jarrae Nykkole Estepp was found naked on a trash conveyor belt inside an Anaheim, California trash-sorting facility. Her death may have been connected to the murders of four other women police believe may have been targeted because they were sex workers. These are just a few cases from the past year, and demonstrate how sex workers face constant threats to their lives.

Perhaps it’s a question of art imitating life, or vice versa? Of course, these video games perpetuate the worse kind of stereotypes about sex workers. It boils them down to one-dimensional props who can be used, abused, murdered and then thrown away like trash. These characters are designed to be compliant objects for player pleasure and violence, who say things like “Love you long time, soldier,” and “Ooh baby, maybe tonight I’ll give you a little taste on the house.”

In real life, however, sex workers aren’t just passive objects programmed for our pleasure. They are mothers, fathers, sisters and brothers; they are everything from organizers to activists, students to artists. Reducing them to the kinds of tropes we see in some video games—then ignoring the kinds of violence they are threatened with both on screen and off—denies their complexity and stake in the fight for their rights to be seen and heard.

Until we recognize that sex workers, like all human beings, deserve to live and work in dignity and without the constant fear of stigma or violence, they will continue to be seen as disposable—both on-screen and in real life. Sarkeesian’s series is a good step in the right direction, but we still have a long way to go.

Susan Rohwer is a freelance journalist who’s writing has appeared in the L.A. Times, Policy Mic, and The New York Times. Follow her on Twitter @susanrohwer.