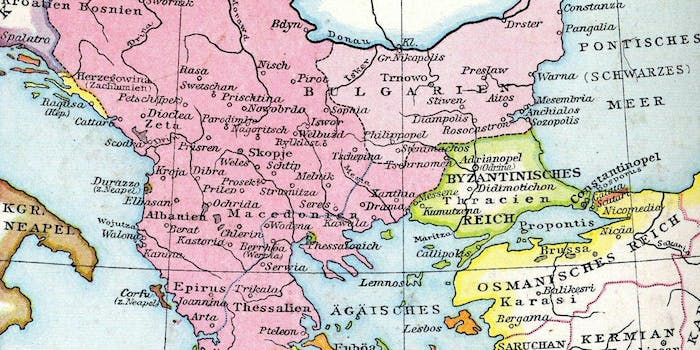 What do you know about the Serbian empire in 1350?

Serbia is a small country now, but it wasn’t always so: the Serbian Empire circa 1350 was relatively huge, encompassing parts of what are now Greece, Albania, Macedonia, and Bulgaria. On Reddit, where obscure facts have a tendency to become memes, referencing the former Serbian Empire has become a trendy new way to say something is really big.

The post was so popular that it made the jump to Reddit’s front page (known a r/all) and set off a whole wave of jokes about how big the Serbian Empire used to be in the 1350s. Some of them are mashups with existing memes, like the Spongebob History edits:

Or the “be careful who you call fat in middle school” meme, which has a before-and-after theme:

Or the “brain levels” meme, which is used to rank concepts according to their desirability or impressiveness. On r/dankmemes, Serbia in 1350 is considered the bright, exploding brain of historical empires.

And, of course, there’s a Drakepost about it:

The burgeoning Serbian Empire trend was even the subject of an episode of the subreddit’s homegrown YouTube show, Meme Alert, hosted by moderator Emersonic420:

As several dankmemes posters pointed out, history is full of larger empires with more territory than 1350s Serbia. So, why is this particular example becoming a meme now?

In a post on r/outoftheloop, the subreddit where people ask for explanations of memes they don’t quite understand, a Serbian Redditor attempted to elucidate its appeal:

“It’s a joke because the Serbian Empire 1355 (and generally during the time of Car Dušan (Car is like tsar, emperor, I guess) was one of the largest Balkan countries and was the height of Serbia’s might, and it had a cultural and structural renaissance (Dušan’s Law being notable for being a law-applies-to-everyone-equally kind of deal, which was new at the time),” aprofondir wrote.

“Serbia is nowadays a smaller, and much shittier country, so people like to remind others of that time, ‘member when we used to be great?”

Part of the appeal may also be that the Serbian Empire’s scope in the 14th century is exactly the type of esoteric knowledge that tends to go viral. Remember trebuchet memes, which turned a type of medieval siege engine into an internet sensation? The entire joke there was that a trebuchet can launch a 90kg stone projectile over 300 meters.

At the time, I tried to explain what’s so attractive about this kind of historical trivia, writing that,  “Reveling in the fact that trebuchets can launch a 90kg stone projectile over 300 meters is like loving the defenestration of Prague when you learned about it in history class, and enjoying being smug about knowing what “defenestration” means. Being a giddy dork about that Jeopardy!-worthy knowledge nugget doesn’t imply that you literally want to see someone thrown out a window and into a dung heap. And being a dork about trebuchets is the same thing—it’s textbook weird teen humor. Literally. It’s in textbooks.”

The Serbian Empire meme seems to be part and parcel of that same phenomenon.

Now Serbia is great again, at least in the sense that it has become an extremely dank American meme, one that’s mostly divorced from its current political and socioeconomic situation. This state of affairs has Serbs on Reddit somewhat divided.

“goddamn as a serbian i want this to become a meme so bad,” wrote petar_petar_petar.

“Im from serbia. Im not proud this is a meme,” napesteam countered, further down the thread.

Like it or not, this meme is happening, and it’s going mainstream fast. But, much like empires, memes may quickly grow huge, but none are destined to last. There have already been sightings of the Serbian Empire meme on Instagram, which meme snobs take as a sign that it will become uncool in short order.

Too bad. That’s 700 years of buildup for one week in the spotlight.