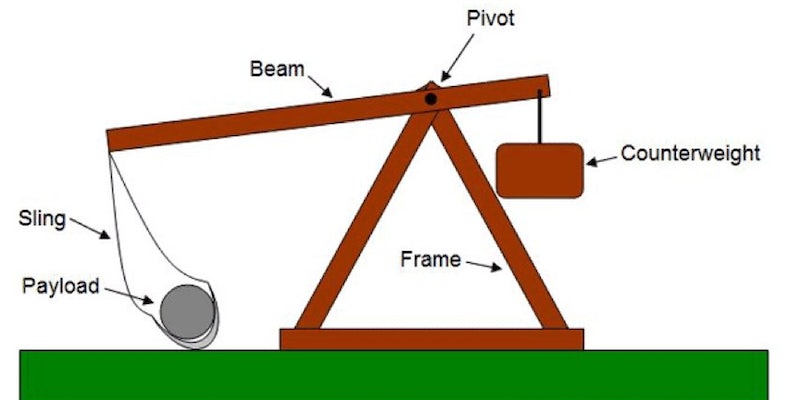 Trebuchet memes are heavy and they're going to go far.

“What’s the deal with trebuchet memes?” someone recently asked Reddit’s “out of the loop” forum. If you’re similarly out of the loop about the online resurgence of middle ages siege machines, don’t worry, there’s a semi-sensible explanation.

The trebuchet, a cousin to the catapult, is basically a giant stationary slingshot that uses a counterweight to hurl very heavy objects. It’s been centuries since the trebuchet was an important part of military strategy, but trebuchets are back, baby! Let’s take a look at why.

Trebuchet memes have quietly existed since at least 2015, but the great trebuchet meme relaunch seems to have started just a month ago. Someone on Reddit’s Today I Learned subreddit—a place that’s mostly made up of surprising or funny ephemera from Wikipedia—discovered the insane story of a gigantic English trebuchet called Warwolf.

“[Today, I learned] King Edward I built the largest trebuchet ever in order to lay siege to a Scottish Castle. The sight of the giant trebuchet so intimidated the Scots that they tried to surrender, but Edward sent them back so he could use his new weapon to launch 300 lb projectiles at the castle,” Redditor dryersheetz proclaimed.

The post was extremely popular, and seems to have catapulted (trebucheted?) the trebuchet into the collective imagination of the meme community.

Right now:
M
Me, looking at phone: *laughs*
Random Guy: "Get a sexy message?"
Me: "No but I got trebuchet memes"

As you can see, a staple of the trebuchet meme is the siege engine’s ability to fling a 90kg projectile a distance of more than 300 meters. The idea of getting a boner over an esoteric stat about a weapon built from a combination of simple machines, the meme community agrees, is seriously [crying laughter face emoji].

Is all the love for trebuchets ironic? On some level, yes. This is not a serious suggestion that we as a society start constructing archaic heavy armaments. On another level, though, smart teens have always loved weird historical trivia.

Reveling in the fact that trebuchets can launch a 90kg stone projectile over 300 meters is like loving the defenestration of Prague when you learned about it in history class, and enjoying being smug about knowing what “defenestration” means. Being a giddy dork about that Jeopardy!-worthy knowledge nugget doesn’t imply that you literally want to see someone thrown out a window and into a dung heap. And being a dork about trebuchets is the same thing—it’s textbook weird teen humor. Literally. It’s in textbooks.

For this reason, trebuchet memes are wholesome and extremely earnest in their dorkiness. Combined with their malleability in that they can be easily mashed up with any other meme, it looks like they’re going have incredible staying power.

Trebuchet memes are a 90kg stone projectile that has just begun its flight. They’re not even close to hitting the top of their arc.