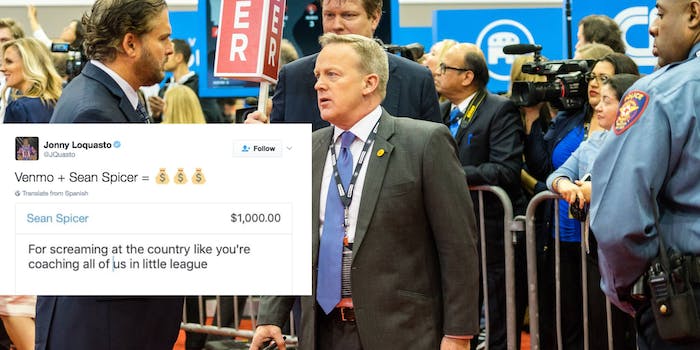 It is debatable how much honesty White House Press Secretary Sean Spicer owes America. While the press no doubt always wants to hear the truth, his job first and foremost is to garner the Trump administration favorable coverage.

What isn’t debatable is that Sean Spicer owes Americans a lot of money.

It's recently come to our attention that @seanspicer is on Venmo, and that he is being trolled pic.twitter.com/zQO23BVYWG

Many are sending him a couple bucks to buy gum, but others who feel violated by the administration’s first couple of weeks are demanding recompense.

Let's all request that Sean Spicer pay us $17.76 for all of his lies. He is AT-seanspicer on Venmo as well. pic.twitter.com/WDGRGbEH7e

I don't know if you know, but Sean Spicer's Venmo is public. My new version of donating is harassing him for money pic.twitter.com/H3V0fzLTRe

#SeanSpicer on @venmo is @seanspicer

Whether it truly is Spicer is unclear, but the account’s friends include Jana Novak, a former speechwriter and policy director on Capitol Hill; John Bresnahan, a reporter at Politico; and Thomas Szold, who served as a communications director for Donald Trump’s campaign.