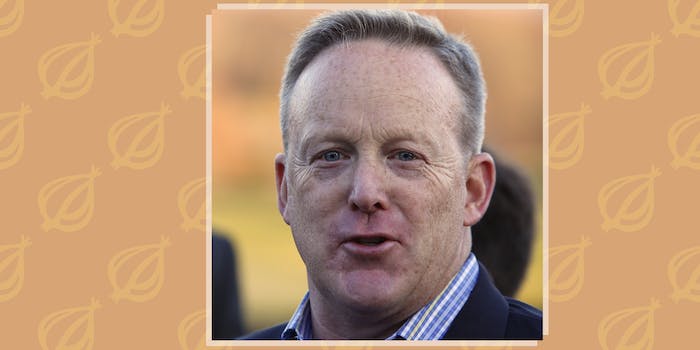 Photo via a katz/Shutterstock Remix by Jason Reed

Is Spicer in on the joke?

This weekend, confusion reigned in America, as President Donald Trump signed an executive order regarding immigration from predominantly Muslim countries, the logistics and legality of which were unclear to most of the nation.

Maybe not exactly the best time for White House Press Secretary Sean Spicer to make a joke by retweeting America’s most famous satirical publication, playfully agreeing with its sentiment that he is spreading lies across the land.

But Spicer did just that.

In response to the Onion tweeting out a video that said Spicer’s primary job task would be to provide the American public with “clearly articulated misinformation,” Spicer let out a hearty bellow.

At the time of the LOL RT, no one was entirely sure of the full implications of Trump’s immigration ban, and whether Department of Homeland Security employees would comply with a federal court order requiring a temporary halt to the administration’s executive order.

Inquiries to Spicer’s private RNC email address, which he may be using to circumvent federal record-keeping requirements, went unreturned.