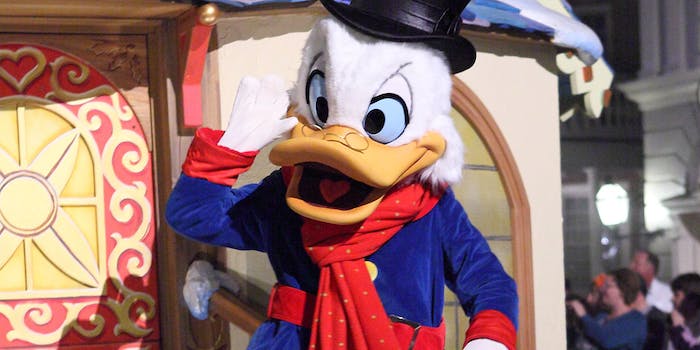 The following is a direct transcript of this morning’s official presidential campaign announcement from Scrooge McDuck.

Thank you all for being here. Thank you. What an enormous crowd. It’s great to be here in the wonderful city of Duckberg, announcing my intention to run for president of the United States.

Please. Please. You’re all too kind.

I’m standing here, in front of my money vault, because America isn’t what it once was. After eight years of the country being run into the ground by a bear who thinks he’s Jimmy Buffett and a wanna-be superhero duck wearing a mask, our country is no longer great. When I hang my top hat in the Oval Office, you can be sure that I will make America great again.

I grew up in Glasgow, Scotland. Yes, that’s a part of America. In fact, it’s the best, classiest part of America. It’s unbelievable just how best and classy Scotland, America’s heartland, really is. Growing up in Glasgow, I didn’t have two nickels to rub together. I had to work for everything I had. I earned enough money shining shoes to pay for a steamship ticket to the Alaskan Klondike. There, I found a golden nugget the size of my bill. From that golden nugget, I built the largest fortune in the world.

I don’t care what that lying bastard John D. Rockerduck says—I am the richest duck in the world. If he wants to contest that, I’ll have my nephews beat his nephews in a hot air balloon race around the world. That’ll show them who has more gold in their money vault. That’ll show everyone.

People may say, “What makes Uncle Scrooge think he has any right to be president?” Well, the American people are hungry for leaders with business experience, not just the same tired parade of failed politicians.

But, just because someone is rich, it doesn’t automatically qualify him to be commander-in-chief. Look at all these losers:

I am the most competent, most capable, most richest, most famous duck this country has. Or, really, any country has. I am your only chance to make America great again.

I will not be taking any questions, because there is ancient druid treasure hidden under Stonehenge, and I intend to find it. Launchpad, get the plane ready. On January 21, 2017, I want to be doing to backstroke through a giant pool of cursed gold in the Lincoln Bedroom.