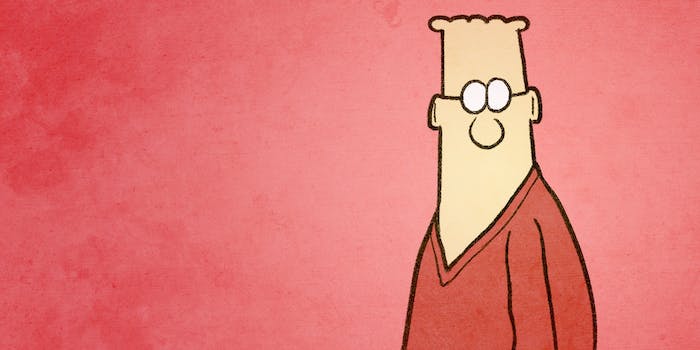 ‘Dilbert’ cartoonist is angry about v-neck sweaters, so we’re raising money to buy him a bunch

Scott Adams—cartoonist and tsar of Dilbert-land, whose imagination is so piercing and vast he has been able to draw the same curved necktie every day for well over 20 years—is angry. And we need to help quell his anger.

Perhaps anger isn’t even the word. Adams is a special kind of “woke.” He’s figured out something that few others have, and he wants us to know. So last week he penned an eye-opening opus in the form of a personal blog post on dilbert dot blog dot com. It’s entitled “The Humiliation of the American Male in 2016.”

Let’s review some of his thoughts so that we can fully penetrate the inquiry:

“It seems to me that the humiliation of American men is now institutionalized in the media.”

“Many of you can’t talk about this topic without being accused of sexism, losing your jobs, and being cast out of your social groups. But I can talk about it because I endorse Hillary Clinton for president. I did that for my personal safety.”

“Clinton has been a strong role model for women and deserves massive credit for that … STOP TELLING ME IN YOUR MIND THAT WOMEN HAVE IT WORSE IN THIS COUNTRY THAN MEN! … I’m sure women do have it worse than men in this country in lots of ways. But it isn’t a competition.”

It’s clear what he’s saying. Men are constantly humiliated by women; men are unable to speak of their humiliation by women for fear of further humiliation; Donald Trump is not scared of humiliation by women; it’s possible women do have it worse than men, but who cares, it’s not a competition—stop yer bellyaching. One could call the logic in this tract Wittgensteinian.

There is one place, however, where Adams may have made a misstep. And this could cause his entire steel castle of testosterone and manly vigor and nothing fragile whatsoever to come crashing down: v-neck sweaters. An example he oft cites is that v-neck sweaters represent women’s (obviously figurative) chokehold on the American male.

Here’s what he writes in reference to a commercial where a womanly woman domineers a cowardly man:

Yes, Adams truly believes these v-neck sweaters are cozy symbols of Male Oppression. Through this we may have figured out a way to remedy his constant humiliation: Get men to buy Scott Adams v-neck sweaters. Lots of them.

You may be asking, “Cale, what would that accomplish?” Well, maybe if Adams had a real male—that is, a manly man who does manly things like not being controlled by women and obsessively drawing nerdy cubicle workers’ mundane hellscape—buy him some v-neck sweaters, maybe he would form a new association with the knitted garment. Perhaps he would see v-neck sweater-wearers in a whole new light. They are not “men” owned by women but “people” leased by J. Crew.

Moreover, this could bring forth a new style: Men who definitely bought their own v-neck sweaters, or had them bought by other men (as opposed to the still-disgraced men who had women buy their pitiful v-neck sweaters for them). These men could walk around, head held high, truly free, while sporting a south-pointing neckline—unfettered by shame and the constant need to be “empathetic” towards others.

To that end, I’ve launched a GoFundMe in the name of All Men Who Want To Help Free Scott Adams From These Performative Constraints.

Scott Adams in a v-neck sweater, presumably purchased by himself or a fellow man.

The rules are simple: If you are man, please donate. We need to do this. We need to give Adams these v-necks so that he can finally live an unembarrassed life. And because he seems to be dealing with a shirt shortage.

I did some research and found that while there are some cheap $10 v-necks, they are not worthy of Adams’ very, very white skin. There’s a clothing company called Oxford, which I think represents the kind of American v-neck grit that Adams will soon so perfectly exude. These sweaters are $34.99. Let’s get him 10 of them. 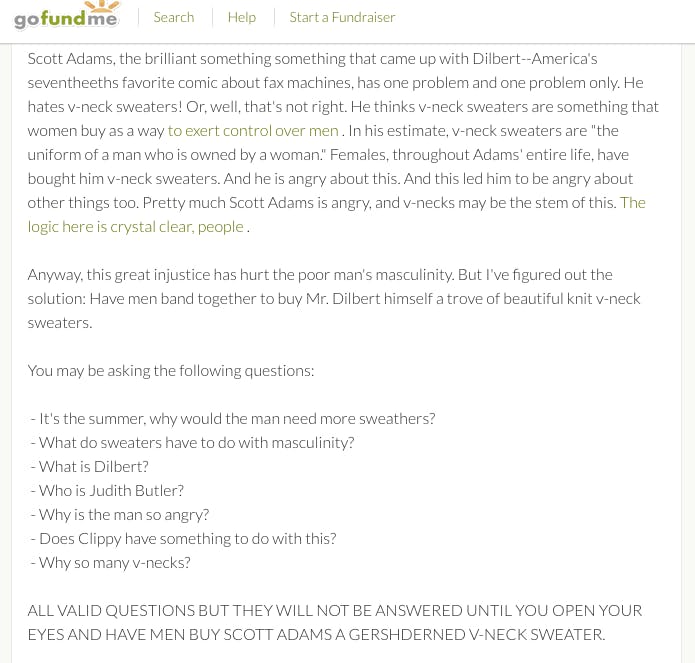 Cathy does not need this.