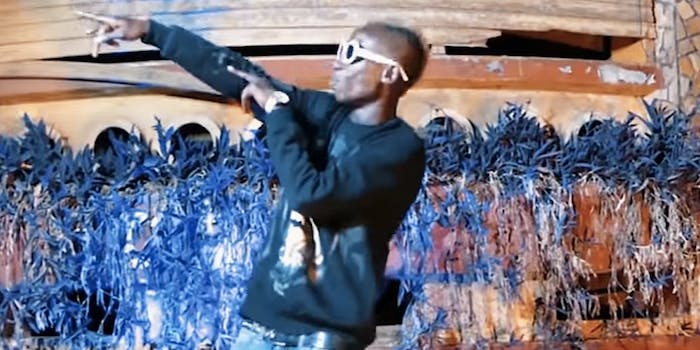 The short answer is gibberish, and the long answer is something else entirely.

Anyone who has spent time on Twitter recently may have noticed the phrase “sco pa tu manaa” appears to be taking the platform by storm.

The only problem is that no one seems to know what it means. Many users are sending a bunch of confused and irritated reactions.

What does the phrase ‘sco pa tu manaa’ mean?

Much like the phrase itself, the explanation is somewhat confusing. According to KnowYourMeme, “sco pa tu manaa” is a slang term in Hawaiian culture. The phrase means both, “What experience does this remind you of?” and, “I’ll hit you.”

For its recent surge in popularity, we have Ghanaian recording artist Kawoula Biov to thank. In April, Biov released a single called “Daavi Neba.” The song features a rap verse by fellow Ghanaian Patapaa. In the months since, the YouTube video for the song has raked in over 700,000 views. (Patapaa’s verse begins at the 1:45 mark.)

However, adding an extra layer of complexity, the phrase “sco pa tu manaa” has no known meaning in Ghanaian language. In fact, people apparently know Patapaa for including gibberish in his music. In the context of the song, the phrase is thought to hold no real meaning.

So, Twitter users gave the phrase their own definition.

Urban Dictionary cites the meaning loosely as, “What’s your opinion on this matter?” or, “What’s your experience?” This is why you might see the phrase with a topic or image, which users then respond to with their own feelings or experiences.

For example, people may provide their own opinions on high school, cologne, boobs, or kicks–just for starters.

Why did it get so popular?

The phrase is popular on Twitter to this day. That’s apparently because it’s an open thread: It invites everyone to talk about a subject freely within the Twittersphere. It’s not English and is simultaneously universal enough for global Twitter audiences to relate to the human spirit of the meme.

For example, on Nov. 6, 2020, the phrase was still commonly used as everyday vernacular. “She was a sco pa tu manaa in a world of bomboclaats,” tweeted @baseddyvp. Weeks later @_pha tweeted: “Life has been so fucked up lately nobody’s even doing sco pa tu manaa’s anymore.”

As @sonic_peed tweeted last month: “I’m so glad I don’t ever have to experience a Millennial teacher. Imaging having to interpret a poem and you get the sheet and the only 2 questions on there “Bomboclatt” and “sco pa tu manaa.”