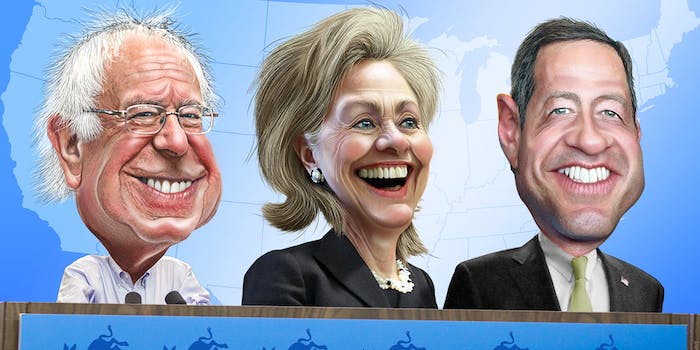 Saturday night’s not alright for debating

The real loser here is democracy.

If you watched the second Democratic presidential debate five weeks ago, consider yourself an anomaly.

That event was the lowest rated of the debates held so far during the 2016 election cycle, drawing in only 8.55 million viewers. Compared to the monster ratings drawn by Donald Trump and the GOP–the Las Vegas debate on Tuesday drew 18 million viewers–it seems like the Democratic party should be worried about this seeming lack of interest. In all likelihood, party leaders may have actually wanted it this way.

.@edhenry on Saturday's Dem Debate: "The DNC set it up this way – they're protecting @HillaryClinton…these debates are being buried."

Clinton-run DNC cuts of @BernieSanders data the week it buries another debate on Saturday night. #RiggedGame

As Alvin Chang of Vox recently explained, only seven of the 100 debates since the 2000 presidential election cycle were held on Saturdays. All of those took place further along  the primary calendar, after voters had already been introduced to the wider field of candidates. “TV ratings are generally lower on Friday and Saturday, which probably explains why there has never been a general election debate on a Saturday night,” Chang wrote. Thursday, he added, is prime real estate for attracting TV audiences—a detail the Republican National Committee clearly kept in mind when scheduling its debates. Of the more than 100 presidential debates held since the 2000 election cycle, 28 so far have been held on a Thursday.

Since only four debates will have occurred before the first primary is held, and a mere two more will take place after that, this significantly diminishes the impact those debates can have on the outcome of the nomination process.

Low ratings disadvantage candidates without strong name recognition. For example, 22 percent of voters reported either having never heard of or not knowing enough about Vermont Sen. Bernie Sanders to formulate an opinion of him, compared to only 7 percent of voters who feel the same way about former Secretary of State Hillary Clinton. Nevertheless, the upcoming Democratic debate – which is also only the third one to be scheduled for that party, as opposed to eight for the Republicans – is scheduled for a Saturday, and falling exactly six days before Christmas.

Hillary Clinton’s campaign has privately lobbied for there to be only a handful of primary debates. In contrast, her opponents have argued for as many as possible. The Democratic National Committee’s ultimate decisions fell much, much closer to Clinton’s wishes than her rivals.

To be fair, the Clinton campaign wasn’t alone in wanting to keep the number of debates relatively low. Both the Democratic and Republican National Committees decided to reduce the number of debates as a way of minimizing intra-party drama. “I think a traveling circus of debates is insanity in this party,” RNC chairman Reince Priebus said early last year. “We’re proposing to have fewer than 10, and this time around, we’re going to pick the moderators.”

This view was echoed by DNC chairwoman Rep. Debbie Wasserman Schultz, who shrugged, “no matter what we decided, there would be individuals who would be unhappy.”

These dismissals haven’t stopped trailing Democrats and the media from asking questions. On the day of the first Democratic debate, Schultz had to deflect intense queries about her scheduling decisions. Candidates like former Maryland Gov. Martin O’Malley overtly accused the schedule of being “rigged” by Clinton supporters. While there’s no evidence the former First Lady did anything unethical, as the frontrunner she stands to benefit most from a debate schedule that limits voter exposure to other candidates, which almost certainly motivated her campaign’s decision.

The big loser in the current debating schedule is small ‘d’ democracy itself.

Beltway pundits have also started to notice. “What a shamefully imbalanced primary season this has been. For all their flaws and fakery, the Republican candidates have squared off frequently, at convenient hours and despite the menacing nimbus of Donald Trump’s hair,” observed Frank Bruni of the New York Times, “The Democratic candidates have, in contrast, hidden in a closet.” Meanwhile, when Josh Voorhees of Slate wrote that Sanders needs to attack Clinton in the third debate to have any realistic chance of winning, he noted that one of Clinton’s biggest advantages was “her friends at the Democratic National Committee, who capped the number of primary debates at six and buried three of the four pre-Iowa events on weekend nights.”

The primary schedule itself has also been compressed to an unprecedented degree. More than half of all primary voters will be casting their ballots during the first two weeks of March. Since only four debates will have occurred before the first primary is held, and a mere two more will take place after that, this significantly diminishes the impact those debates can have on the outcome of the nomination process.

The big loser in the current debating schedule is small ‘d’ democracy itself.

On the Republican side, the debates have brought equal doses of conflict, outrage, and really entertaining television (even if they have skimped on ideological substance). By contrast, the Democrats have gone to the other extreme, working so hard to avoid potentially embarrassingly drama that they have squelched healthy competition entirely. If Clinton holds on to her front-runner status and polls show voters went to the polls without enough information to form opinions about her rivals, the voters will have lost no matter who ends up in the White House.