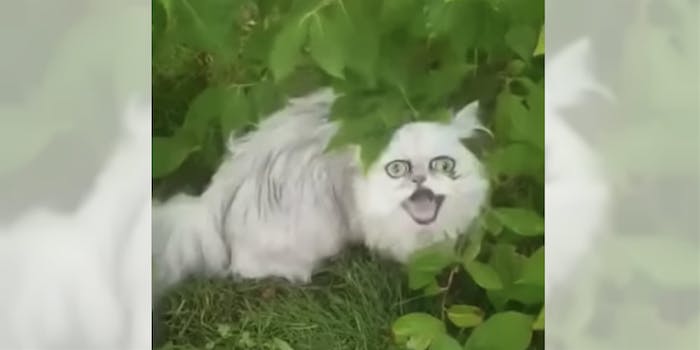 Michael Rapaport has another encounter with the internet’s strangest cat

Actor and comedian Michael Rapaport is back at the voiceovers again. He just published a sequel to his hilarious viral video reacting to one of the internet’s strangest looking cats.

Earlier this month, Rapaport dubbed over a home video of Instagram-famous Wilfred Warrior, an unfortunate-looking Chinchilla Persian cat. The internet collectively lost it, catapulting them both into virality.

“Ma call the police!” The War at Home actor shrilly yells over a video of Wilfred originally taken by his owner. “That fucking cat is back! The one that looks like it’s wearing makeup!”

Many Twitter users commented on the unfortunate feline’s striking similarities to celebrities.

Man @TomiLahren will not leave you alone!

Others still hadn’t yet caught on that Rapaport is only acting and that he doesn’t actually own this cat.

I suggest u get a good hand sprayer & spray kitty with water. Cats learn quickly. I trained our cat not to enter the kitchen. Sprayed twice, then just showed the sprayer twice, and kitty sat politely at the door. I gave him a treat for sitting politely. No meows in demand.

Poor Wilfred. At least his owner seems to have a sense of humor about the internet laughing at his expense. A post on his Instagram said, “Safe and sound at home after antagonizing @michaelrapaport and his poor Ma again.”