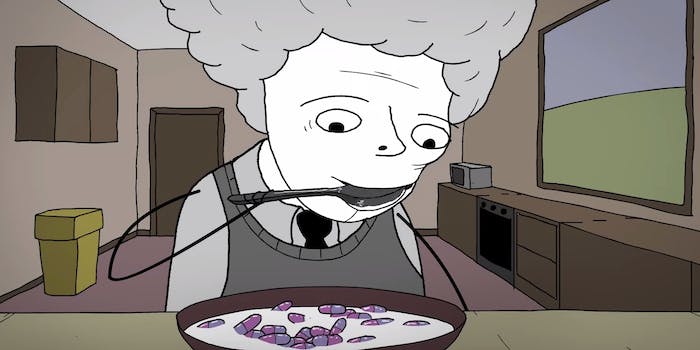 David Firth—the artist behind Salad Fingers—has just made another of his series a trilogy with the release of “The Unfixable Thought Machine.”

This new short continues his five-year-old and frustratingly slowly updated Health Reminder series, which takes the surrealistic and philosophical sensibilities of Salad Fingers and directs them at the healthcare industry. Specifically, the arena of mental health:

The animation is busier and more erratic than that found in Salad Fingers, which suits the fast-paced, stream of consciousness narration of its main character—an unnamed doctor that seems hellbent on destroying the health and minds of his patients. (In the first 90 seconds of the five-and-half-minute short, he turns a man with a simple stomach ache into a regular a junkie, so get ready for some satire.)

This latest installment is the first in the series to be released in 1080p, and Firth’s painstakingly crafted work looks beautiful. The peaceful, ambient music behind the animation is from Locust Toybox—another of Firth’s projects—proving that, while the auteur theory may be debatable in cinema, it’s absolutely alive and well in the world of experimental animation.

You can check out the massive stockpile of Firth’s other great work (totaling over five hours!) on his YouTube channel.