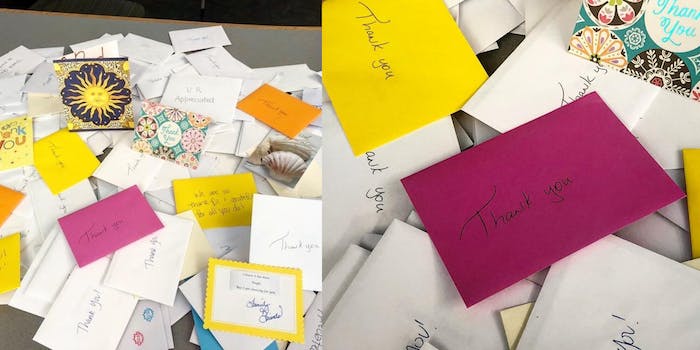 Police department accused of writing ‘Thank You’ cards to itself (updated)

People noticed the handwriting appears to be the same on the cards.

Update 3:27pm CT, June 7: When reached for comment, an Austin Police Department spokesperson told the Daily Dot it has received “many” inquiries regarding the cards. “The cards were from several community members to include kindergartners and Austin families, who wanted to show support for APD officers. Two people, who organized delivering the cards in person, addressed the envelopes with a ‘Thank you,’ so our officers would open the notes to receive encouragement during these difficult times. That is why the front of the envelopes appear to have the same handwriting.”

The Austin Police Department (APD) posted photos of a table full of “Thank You” cards it allegedly received from supporters. People noticed something suspicious about the cards.

In the photos, a slew of cards with “Thank You” written on the front of their envelopes fill a table. APD captioned the photo, “We can’t express enough how grateful we are to serve you, Austin. Our officers have been working around the clock during these unprecedented times and thank everyone who took the time to write and make our day a little brighter. #OneAustinSaferTogether #Thankful.”

People online began calling out the department, pointing out that the handwriting appears to be the same on all the thank you cards, specifically the letter “T” in the “Thank You.” It has a distinctive swirl in its arm (the top of the capital “T”).

“Damn. Everyone in Austin has the same handwriting. Public schools must be amazing out there,” one person wrote in response.

Another viral tweet pointed out that, in addition to the similar handwriting, the envelopes had “no stamps” and are “all the same size as if bought in bulk.”

“I love little regional quirks like how everyone in austin has the same handwriting Smiling face the world is such an interesting place,” another viral tweet read.

Police across the nation are being accused of not properly de-escalating violent situations at protests and even inciting violence themselves. The APD, specifically, has been seen on video shooting at protesters carrying a critically injured Black Texas State University student, Justin Howell. Howell’s brother says he now has brain damage after police shot him in the head with a bean bag round. An Austin teen, Brad Levi Ayala, was hospitalized after getting similarly shot in the head with a bean bag round. The department has also been accused of shooting the “less-lethal” rounds at medics, a pregnant woman in the stomach, and a teen on his way home from work.

“How many cards has @Austin_Police sent to Justin Howell in the hospital? You know, the kid that took a ‘less-lethal’ round to the head,” one Twitter user wrote.

The Daily Dot has reached out to the Austin Police Department.