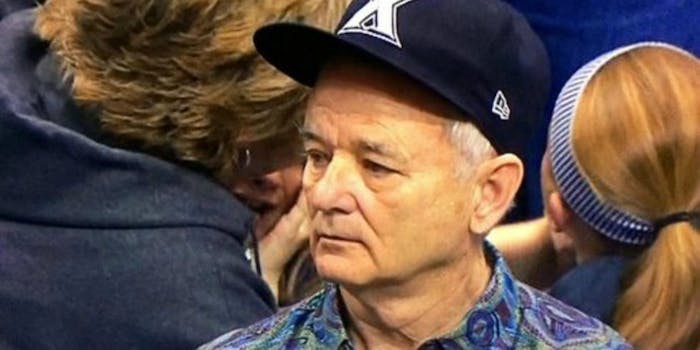 The first weekend of the NCAA tournament saw all the usual exciting finishes, buzzer-beaters, upsets, and general cacophony that make it one of the best sporting events in the entire world. It’s called March Madness for a reason, and the first four days of the 2016 tournament didn’t disappoint.

Unless your name happens to be Bill Murray.

But that’s the way it goes sometimes: Seventh-seeded Wisconsin knocked off No. 2 seed Xavier on Sunday night with a buzzer-beating 3-pointer, ending the season for—among others—Xavier assistant coach Luke Murray, whose father just so happens to be the beloved actor/comedian.

First, the shot by Bronson Koenig, one of the most-exciting moments of the tournament thus far:

The reaction to the reaction was all too predictable. Bill Murray, you are the new Crying Jordan meme, the viral image that turned Michael Jordan’s teary-eyed Hall of Fame speech from 2009 into a recurring punchline for whenever a sports squad suffers a heartbreaking defeat.

And Twitter users had a field day with the update on Sunday.

Jordan already has made it clear that he doesn’t mind the Crying Jordan meme—mostly because it’s not costing him money. There’s no word on whether Murray cares about his new role in it, but others immediately bristled at the notion that Murray had been fashioned into the meme.

Bill Murray is a national treasure, Twitter. You leave that man alone.

The best March Madness miracle would be a guy hitting a shot that means I never have to see that crying Michael Jordan meme again.

Either way, we know there’s only one way for Murray to feel better—and to make us all feel that the world is right again. It’s time for Murray to get to work on screwing over Martin Shkreli.