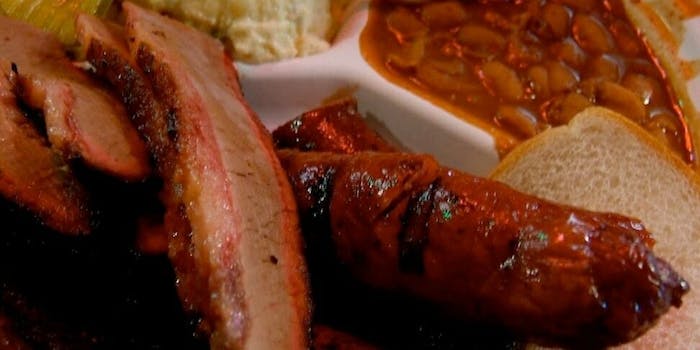 Do NOT mess with the BBQ snobs.

If you talk about politics or religion on Twitter, you can expect that somebody is going to blast you for your opinions. But if you post something barbecue related, be prepared to get fully charbroiled. Especially if all you have is a sad picture of some brisket and a couple of pickles.

Such is the problem for the @munchies Twitter account which posted a link Sunday to its story about how Brooklyn BBQ was trying to take over the culinary world. The story itself isn’t necessarily the problem (though anybody outside Brooklyn would probably shake their head at the assertion). It’s the photo accompanying the link that turned Twitter apoplectic.

Why is Brooklyn barbecue taking over the world? https://t.co/aiemJpWxZw pic.twitter.com/dGPyQ7X912

The reaction was quick and decisive.

A tray of sorrow. https://t.co/xMc3uVmeCe

CC everywhere outside of Brooklyn, just give up. The cool kids have discovered BBQ. https://t.co/Lbs4cO9Syv

No. Just stop before all the other BBQ embarasses you. https://t.co/lA1rF69Vog

Lonely is the perfect word. It looks like the brisket is saying hellooooooooooooooo to the sad little rolls. https://t.co/sXX6pOBMTY

This is what a BBQ plate should look like. pic.twitter.com/Hk71rXTGck

And don’t even think about comparing Brooklyn BBQ to the food that hails from Texas or Kansas City.

Compared to this in Austin? Nah, not so much. pic.twitter.com/u7zMeEY1rd

Or this in Lubbock. pic.twitter.com/6RrBCopNKX

Kansas City looking at that plate of hot ass like….. pic.twitter.com/ePiqgAfDMh

All of which is to say: Please don’t try to post a BBQ photo online when there’s nothing but BBQ snobs lurking about. They’ll leave you with nothing but burnt ends.