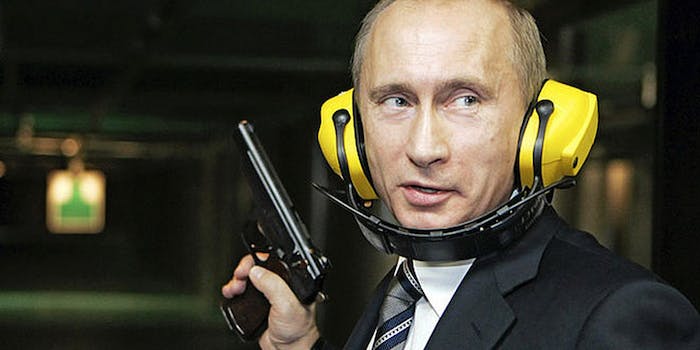 As Ukraine conflict escalates, Russia cracks down on Internet freedom

Russia has faced sharp international scrutiny this week for its foray into the Crimean peninsula. But alongside this ground invasion, the Russian government is waging another campaign—a campaign of Internet censorship against its own people.

Russia has been blocking its citizens from social media groups that support the Ukrainian protesters, who recently drove-out exiled former President Viktor Yanukovich. Now a Russian court is ordering one of the nation’s leading Internet service providers to block a slew of other websites, including Wikipedia pages, for hosting “extremist content.”

According to Russian news service RIA Novosti, a regional court in Russia’s far east has ordered the Rostelecom Internet company to block access to 17 different websites by March 10. The restrictions apply to individual links on sites, including Russian Wikipedia, the search engine Yandex, and film site Kinopoisk.

Among the banned sites is the Russian Wikipedia page for Adolf Hitler’s manifesto Mein Kampf. According to a representative of the Khabarovsk Central Court, which issued the ruling, the entry was blocked “due to the fact that this article earlier had a link to the text” of the actual book.

Though the ruling is dated Feb. 10, several weeks before the Russian incursion into Ukraine, Russian President Vladimir Putin has used Nazism as a scapegoat for his siege of Crimea.

“Neo-Nazis and anti-Semites are rampant in Ukraine and particularly in Kiev (and) people in eastern Russia are worried,” Putin told reporters on Tuesday.

The Khabarovsk court has ordered Rostelecom to restrict access to the offending websites by means of an IP address filter, which RIA Novosti points out could potentially block other pages hosted on the same servers. Rostelecom plans to appeal the decision.

This ruling comes amid a general crackdown on Internet freedom in Russia. Earlier this week, 13 pages were blocked on leading Russian social media site VKontakte for allegedly promoting “terrorist activities” and “participation in unsanctioned public events” related to the uprising in Ukraine. The Russian government has also taken a hard line against the Internet cryptocurrency Bitcoin, with the nation’s general prosecutor declaring last month that it was not legal tender and thus couldn’t be used by Russian citizens.

Much of this censorship comes from Russia’s response to a string of terrorist attacks last December that killed 37 people in Southern Russia. RT reports that the Duma, the Russian legislative body, is close to passing a new anti-terrorism law that, among other provisions, would give the government greatly enhanced controls over Internet activity.

The proposed legislation would require all companies or individuals who “organize the spreading of information or data exchange between users on the Internet” to keep detailed user activity logs for at least six months. It also places limits on anonymous online money transfers and completely bans anonymous electronic payment systems of foreign origin.

Prior to Russia’s current effort to curtail terrorist activity, the country had passed a law in 2012 that gave state agencies the ability to censor, without court order, websites they consider to be promoting suicide or illegal drugs, or disseminating child pornography. According to Rublacklist, a Russian Internet watchdog group, the blacklist law led to more than 85,000 websites being banned in the first year. Again, the IP filter system imposed for blocking the sites led to many unrelated sites on the same servers being banned, even though they didn’t host any objectionable content.

Internet freedom has been particularly important in Russia, where the government exercises tight control over traditional state-run media outlets. Social networks like LiveJournal have helped political opponents to Putin’s regime find a voice and cultivate a following.